An airside economizer is typically used on a packaged rooftop or tied to an indoor AHU, allowing filtered outside air into the space when outdoor temperatures drop below 55°F (12 °C) (the common supply air temperature of indoor spaces) thus alleviating the need for the refrigeration cycle to be running. Interior space is being cooled yet the refrigeration system is not running, hence the name Free Cooling.

If we now transition back to the chiller world, the equivalent would be a free way to supply whatever temperature chilled water we need without running the chiller. Free Cooling isn’t literally free because it does require an initial capital investment to own. But payback periods can be very rapid depending on your range of ambient temperatures where you live, and the needed leaving (or supply) temperatures of your chilled water demands. For instance, it might take five years for a hospital in New Orleans to recoup their investment if running 40°F (4 °C) chilled water for an operating room suite, but it might take less than a year for a data center in Boston running 70°F (21 °C) chilled water to its servers. 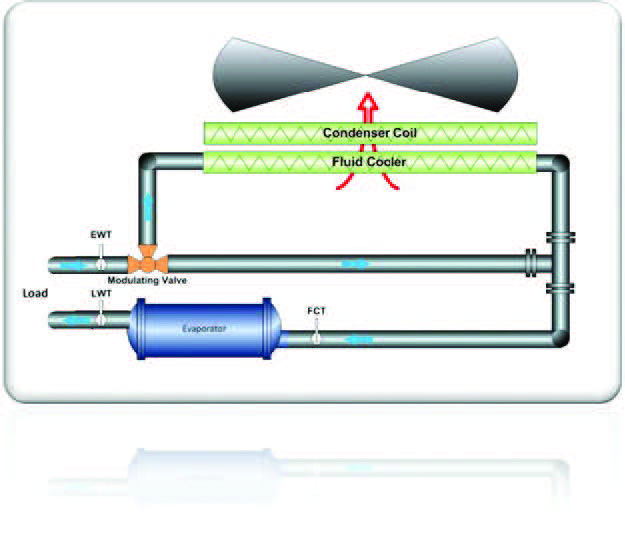 There are many ways to achieve free cooling with different types of systems. For water-cooled systems it is common to use a large plate & frame heat exchanger to transfer cooling between the cooling tower loop (when temperatures are favorably low) and the chilled water loop. There is also a thermosyphon system using colder than normal condenser water temperatures to move refrigerant around without the use of the compressor while still achieving some heat exchange at various levels, depending on the exact temperature difference. For the purposes of this article, let us focus on a more recent and expanding technology for free cooling associated with air-cooled chillers. To be clear, dedicated air-cooled free coolers, or fluid coolers, have been around for many years but now we can economically integrate this function within a packaged air-cooled chiller or a modular air-cooled chiller system. 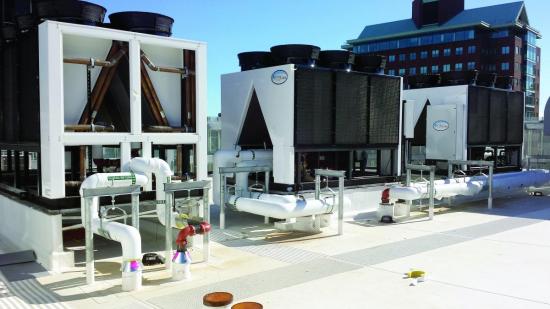 In an integrated system, there is a water coil sandwiched directly against the normal copper tube/aluminum fin refrigerant coil being used as the condensing surface of the air-cooled chiller with condenser fans pulling air simultaneously across both (see Figure 1). Note the three-way valve is fully configurable to an owner’s desired activation temperature (Figure 2 is a field installed chiller in Boston with access panels removed to show both coil header pipes from the side).