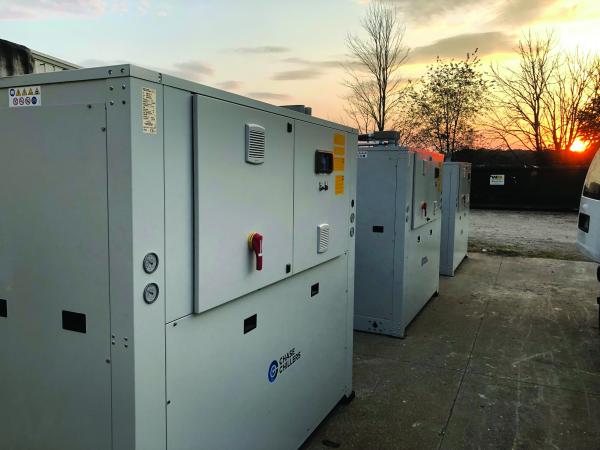 The plant’s goal is to avoid adding any extra heat to the heat sensitive materials as soon as they reach the melt point in the extruder barrel. If the temperature gets outside the targeted melt temperature even a little bit it can start to negatively impact the physical properties of the material. The need to carefully control the melt point places a premium on reliable chilled water.

As the plant continued to grow, the need for more chilled water to meet increased production goals outpaced the capacity of the original chillers installed at the plant years ago. Additionally, one or more of the aging 30-ton chillers needed to be taken offline all too frequently for routine maintenance and repairs.

The situation led to scheduling issues with production. As an example, chillers weren’t able to deliver the volume of chilled water at the required temperature during peak production. Additionally the operation experienced unplanned repairs. As a result, the plant need to make adjustments to production, such as slowing the pounds per hour of material extruded – or if that wasn’t possible – shutting down an extrusion line to keep the others operating at the proper melt temperatures.

The aging chillers also became maintenance-intensive, which took time away from a small maintenance staff with other responsibilities. During the warmest summer months, there were also times when a chiller would trip off because it reached its cooling capacity limit.

Knowing it needed to upgrade its central chiller system, the company set out to  replace the aging chillers with a solution that would allow it to meet production and quality goals, as well as plans for continued growth.

After evaluating a variety of process cooling solutions, the extruder chose to work closely with CASCO USA to upgrade its central plant chiller system with three air-cooled CWB chillers from Chase Cooling Systems. The company has a long-standing relationship with CASCO USA, which is a supplier of process cooling equipment, as well as air compressors and blower and vacuum systems. (See sidebar article about CASCO USA.) 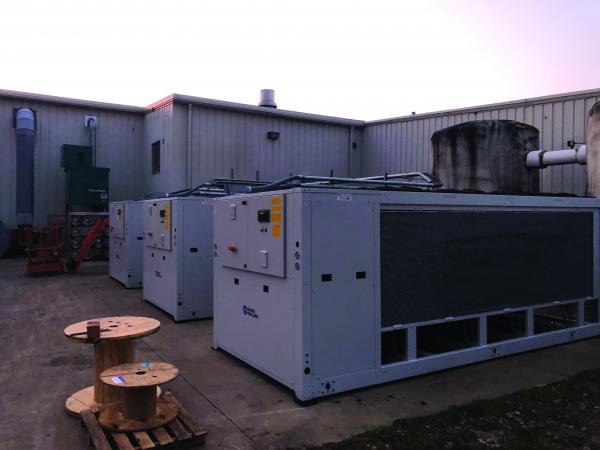 The team at CASCO USA installed the CWB chillers in 2019 in place of the two aging, 30-ton chillers located outside the production facility. The installation also included new Crane-Deming 350 gpm pumps. The new chillers were installed without the need to replace water tanks, or the need to retrofit piping.

Each CWB chiller at the plant is rated to deliver 115 tons of chilled water for a total of 345 tons of cooling capacity. Each CWB chiller includes a variable speed condenser fan; tandem, hermetic scroll refrigeration compressors; and stainless steel brazed plate evaporators. In addition, each chiller is designed with a microprocessor controller with a user interface that features multi-line display to clearly indicate operating pressures and alarms. The units also use environmentally friendly R-410A refrigerant, which eliminates the use of outdated R-22 refrigerant in the original 30-ton chillers.

During normal production today, the three new chillers operate in parallel at 50 to 60 percent capacity each to meet the needs of all eight extrusion lines, as well as other production equipment that includes a 75-horsepower (hp) water-cooled, rotary screw air compressor. The water-cooled air compressor serves as a backup to a newly installed 100-hp air cooled rotary screw air compressor that CASCO USA also supplied and installed. The plant also uses its existing 160-ton split-system chiller as a backup chiller, providing additional redundancy for cooling water if needed.

The installation of the new chiller system went smoothly and allowed the plastics extruder to maintain production at all times – and all issues with chiller maintenance are ancient history. Most importantly, the upgraded central chiller system provides more than enough cooling capacity. As such, the company is able to focus on meeting production goals – and not on adapting its production schedule based on the limitations of the original chiller system.

All photos courtesy of CASCO USA.