The Sterling Heights Assembly Plant (SHAP) first opened in 1953 as a missile plant, producing jet engines for the U.S. Army. More than 30 years after its 1980 conversion to an automobile plant, millions of vehicles have rolled off the line at SHAP.

The Sterling Heights facility has undergone extensive overhauls and re-tooling in the last decade. In 2010, Stellantis (formerly FCA) announced it would invest nearly $850 million in a new state-of-the-art paint shop at the SHAP Site, as well as the installation of new machinery, tooling and material-handling equipment. The following year, the company added another $165 million to the investment to build a one million-square-foot body shop.

In 2016, it was announced that the auto giant would invest $1.48 billion to again retool the SHAP site to build the next generation Ram 1500 and support the future growth of the Ram brand. The overhaul included an upgrade of the South paint shop and its Energy Center, which houses chillers, hot water generators, pumps, purified water equipment, non-potable water supplies and associated equipment. Production at the retooled plant launched in March 2018. 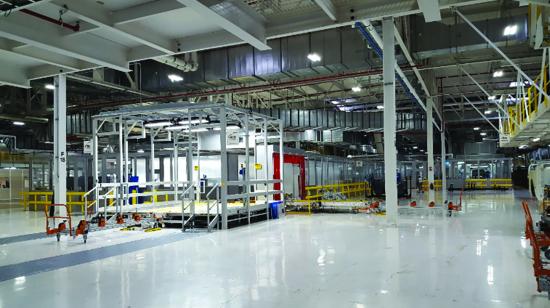 A Push for Sustainability

At the onset of construction for the SHAP South Energy Center, Stellantis management was focused on efficiency and sustainability, seeking to create an environmentally friendly structure that would utilize technology to decrease operational costs. Stellantis tasked tekWorx, an engineering and technology firm specializing in real‐time optimization of chilled water systems, to assist in designing and implementing energy saving HVAC solutions at the new Energy Center site.

Focusing on energy at the onset of the project meant that attention was placed on optimizing the system in the design phase, rather than retroactively optimizing an existing plant that had the potential to be over-engineered to meet design day-load conditions. The early involvement of tekWorx and partner Johnson Controls (JCI) ensured equipment was properly sized for the various load conditions, while still providing additional capacity for future loads. More importantly, tekWorx and JCI worked with Stellantis to select HVAC equipment based on efficiency ratings for the shoulder months and low-load conditions that would also operate the complete system most efficiently during design days.

While the Variable Primary pumping concept was first implemented back in 1995, many modern designs still utilize the Primary/Secondary pumping concept. Primary/Secondary systems often suffer from “low ΔT syndrome”, a condition wherein cold water from the chiller and warm water from the load mix before returning to the chillers. This low ΔT reduces chiller capacity and places the chiller on a less than desirable point on its efficiency curve. tekWorx designed the SHAP South Energy Center with a Variable Primary chilled water pumping configuration to eliminate the mixing and raise the ΔT to design levels. Chiller energy is saved by continuously providing exactly the amount of cooling demanded by the load.

In addition to this efficient hydronic configuration, tekWorx also installed its Xpress® solution, a combination of adaptive control algorithms and Tridium Niagara® N4 hardware for the real‐time control and optimization of the chilled water system. With trucks rolling off the line every minute, the decision was made to implement tekWorx Xpress® solution on an industrial Allen-Bradley ControlLogix PLC. Known for high reliability, this option is well suited for industrial environments with a wide range of ambient temperatures and humidity.  The front-end graphics, trends and alarms resided on Tridium’s Niagara N4 software platform. This architecture ensured maximum operating reliability and efficiency while providing an interface with a detailed and holistic view of the plant and its equipment.

The following tekWorx sequencing and control algorithms were implemented at the SHAP South Energy Center:

All chillers were supplied with variable frequency drives (VFD). Because the South Energy Center serves critical processes, the entire chiller plant is engineered for a fully loaded, design day condition which occurs about 1% of the time. The other 99% of the time, the VFDs ensure that the plant can operate more effectively at part load conditions. In addition to the VFDs, the chillers utilize a variable orifice which allows the chiller control panel to adjust refrigerant flow to the evaporator and maintain the proper refrigerant levels in both shells. This tighter control of refrigerant flow allows for more efficient part-load operation. 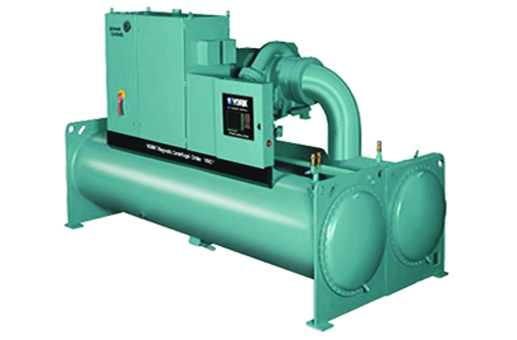 YORK® YMC² magnetic bearing centrifugal chillers, supplied by Johnson Controls, were selected for the project for a variety of efficiency reasons.

The chillers, ASHRAE 90.1-2004, 2007 and 2010 compliant, also were equipped with York’s proprietary QuickStart feature. This feature is designed for critical cooling installations where the goal is to re-establish cooling as fast as possible after a power failure. The QuickStart feature minimizes the time to restart and load the chiller to rapidly achieve the specified leaving chilled water temperature. This feature also includes an Uninterruptible Power Supply (UPS), which keeps power flowing to the chiller’s control panel as well as the required portions of the VSD control circuit. In a process load scenario like that of SHAP, avoiding downtime is critical. This feature allows the Energy Center to get to 100% load conditions within three and a half minutes after a power failure.

QuickStart also ensures the site can automatically transition between Mechanical and Free Cooling without fear of losing supply temperature to the load.  Systems that take too long see too high of a spike in the supply temperature and cannot remain in free cooling mode for as long.

The Xpress® control and optimization solution implemented at SHAP for the chilled water system leverages several key algorithms to continuously operate the Energy Center equipment as efficiently as possible. According to ASHRAE, any chilled water system with an annual average plant efficiency of 0.70 kW/ton or less receives a rating of excellent.  The net result of the algorithms being implemented and the equipment utilized at SHAP South Energy Center have resulted in an average annual total system efficiency of 0.42 kW/ton over the last three years. 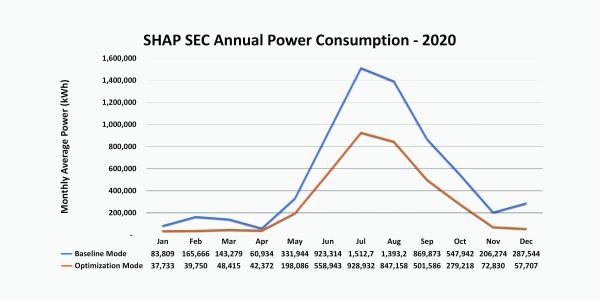 In addition to the hydronic, control and equipment implementation, the other major factor in this efficiency project was the implementation of the System Performance Dashboard. This interface views Key Performance Indicators (KPIs) such as kW and kW/ton performance for each piece of major equipment as well as those of the total chilled water system. The intuitive user interface includes a baseline vs. projected vs. actual graph showing real-time energy performance relative to historical data and trending capabilities to provide an instant look at the long‐term view of system performance. The system equips the site operations team with real-time energy data for all chilled water equipment to quickly identify energy waste and equipment problems, as well as overcharges and errors on energy bills. The operations team also benefits from the alarming functionality of Xpress® which sends emails or texts to facilities staff when equipment such as a fan, pump or chiller is operating outside expected parameters. 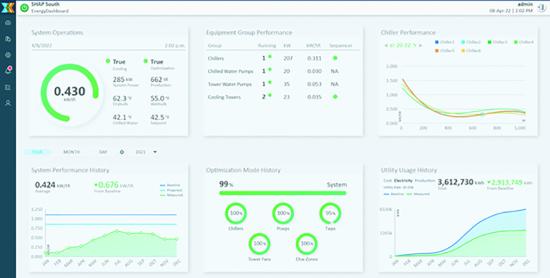 In addition to significantly reducing energy use and expenses, the design and optimization of the SHAP South Energy Center has resulted in a LEED Gold certification, the U.S. Green Building Council’s second highest designation.  The SHAP South optimization project demonstrates how effective technology can simultaneously benefit operations and the environment.

Ryan Cowan, Engineering Manager at tekWorx, was involved in the SHAP project from start to finish. A graduate of the University of Cincinnati, he specializes in complex automotive and pharmaceutical controls and optimization projects.