For decades, the most common cooling water treatment programs for large industrial cooling tower-based systems have relied on a combination of inorganic and organic phosphate (PO₄) chemistry to maintain the quality of cooling water to ensure system efficiencies. However, important factors are driving an evolution away from phosphate-based chemistry towards non-phosphate/non-zinc treatment methods to improve cooling system reliability and efficiency at many plants.

Inorganic and organic phosphate programs, such as those that relied on phosphonates, phosphinates, and polyphosphates, etc., emerged as the technology of choice when chromate and zinc-based corrosion inhibitors were phased out due to environmental concerns. However, this transition did not come without difficulties, including the issue of precisely controlling the chemistry to avoid scale formation in heat exchangers. In addition, phosphate-based treatments promote algae growth on cooling tower wetted locations exposed to sunlight and in holding ponds, resulting in increased biocide feed.

Two additional factors has also driven an evolution away from phosphate-based chemistry toward non-phosphate treatment methods. One is the increasingly problematic issue of phosphorus discharge and its effects on the generation of toxic algae blooms in receiving bodies of water. The second is growing evidence that well-formulated non-phosphate programs are more effective, from both a technical and economic standpoint, than phosphate/phosphonate chemistry for scale prevention and corrosion protection.

Influence of Phosphate in the Natural Environment

Phosphorus, along with nitrogen and carbon, is a macronutrient that is essential for all life forms. In fact, it is often the limiting nutrient for growth in aquatic systems because it is present in very low concentrations relative to that required by plants and microorganisms. Yet it in high concentrations it can be problematic.

Algae derive their carbon requirements from inorganic bicarbonate and carbonate, utilizing energy from sunlight to convert the inorganic carbon into organic carbon for cellular tissue growth. Some species of algae are also capable of “fixing” atmospheric nitrogen gas, using the nitrogenase enzyme to convert N2 into ammonia and other compounds required for the biosynthesis of nucleic acids and proteins. Common among the photosynthetic nitrogen fixing species are cyanobacteria, commonly referred to as “blue-green algae.” Cyanobacteria are known for their extensive and highly visible green blooms. An example is  a cyanobacteria bloom in the shallow western basin of Lake Erie that occurred in 2011. The unpleasant and unsightly algae growth resulted in fouled beaches, sharply reduced tourism, and a decline in fish populations.  Apart from their noxious sensory impact, cyanobacteria also produce microcystins and other cyanotoxins that are toxic to fish, birds, and mammals. 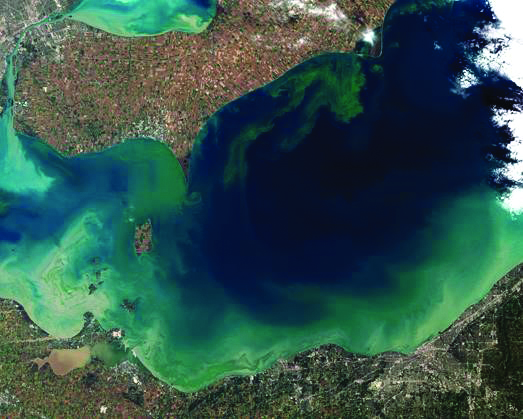 The presence of phosphorus in aquatic systems is also problematic because it ultimately leads to a reduction in dissolved oxygen, which is required by fish and other aquatic life forms. Dissolved oxygen is consumed rapidly by bacteria associated with the decay of algae, resulting in hypoxic conditions (< 2 mg/l (dissolved oxygen) that do not support aquatic life. Environmental scientists are aware of these issues, and industrial phosphorus discharge is becoming increasingly regulated.

The growing evolution in treatment chemistry to eliminate phosphorus discharge in order to protect the environment has impacted water treatment programs designed to prevent fouling and scaling in cooling systems, which is essential for sustainable operation.

Factors critical to cooling water chemistry control are corrosion, deposition (scaling and fouling) and biofouling (both micro- and macro-fouling). In this era of heightened environmental awareness, the classical cooling water triangle could be expanded to a four- or five-sided figure to include control of discharge chemistry, and increasingly, issues related to makeup water conservation.

Iron is oxidized at the anode and enters solution as the ferrous ion (Fe+²). The process releases electrons that flow through the metal to the cathode, where the electrons reduce dissolved oxygen to hydroxyl ions (OH-). Hydroxyl ions then react with the iron ions to complete the electrical circuit and form an initial product of Fe(OH)², which continues to oxidize to eventually form rust, with a basic formula of Fe₂O₃∙xH₂O.  Uncontrolled oxygen attack can cause severe damage in piping networks and generate deposits that may partially or completely restrict flow.

Corrosion inhibitors function by slowing down reactions at either the anode, the cathode, or sometimes both. Treatment evolved to phosphate-based chemistry for both scale and corrosion prevention. The programs typically function at a mildly alkaline pH, which minimizes general corrosion. The chemistry also provides additional corrosion protection, as phosphate will react with Fe+² produced at anodic sites to form a reaction-limiting deposit, while Ca₃(PO₄)² precipitates in the local alkaline environment at cathodic sites to inhibit electron transfer. However, even small upsets in phosphate programs can cause severe calcium phosphate fouling, and at one-time excess Ca₃(PO₄)² deposition became almost as great a problem as calcium carbonate scaling had been before. Ca₃(PO₄)² has inverse solubility (solubility decreases with increase in temperature and pH) and tend to lay down as thick scales on the heat exchangers.

Though every type of industry suffers with scaling issues due to improper operating, this scaling problem is especially prevalent in “heavy” industries such as refineries, petrochemical plants, steels, etc., which commonly have very hot heat exchangers and low water velocities.

The Emergence of Non-phosphorus Chemistry

The effort led to the introduction of ChemTreat’s FlexPro® technology, which contains Reactive Polyhydroxy Starch Inhibitor (RPSI) chemistry. The development and application of this corrosion inhibitor chemistry for use in cooling towers under normal flowing conditions has been described in earlier publications*. Since then, several products containing RPSI chemistry have been formulated and applied in several industries including power, refinery, chemical, steel, power, and light industrial. 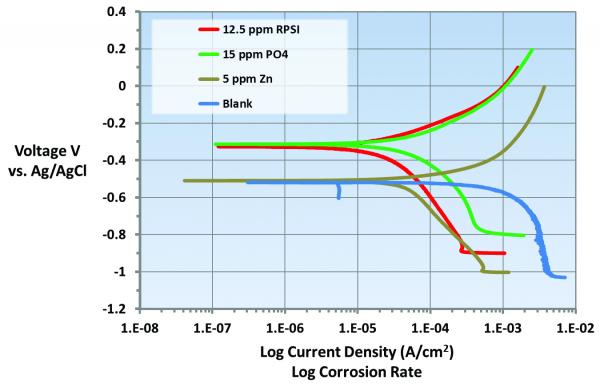 Figure 1. Shown is a current vs. voltage graph with various chemistries. The curve in green (PO4) shows increase in anodic current and the shift in corrosion potential to more positive values. This indicates that PO4 is an anodic inhibitor. The curve in brown (Zn) shows an order magnitude decrease in cathodic current, indicating that Zn is cathodic corrosion inhibitor. Whereas, the curve in red (RPSI) shows reduction in corrosion current in anodic and cathodic directions and shift in corrosion potentials to more positive values. This indicates that RPSI chemistry is a combination of anodic and cathodic corrosion inhibitor.

RPSI chemistry has also shown to be effective in field applications in forming a passive film under stagnant conditions and during preoperational cleanings conducted at pH₃ **. One study also reported the ability of RPSI chemistry to passivate during preoperational cleaning***. In the study, efficacy of RPSI chemistry was compared to the traditional passivation chemistries such as polyphosphates and organic phosphates. It demonstrated non-phosphorous chemistry forms a passive film which persists for several days in untreated blank water. Formation of persistent passive film is very essential in cooling systems since this will protect the system under upset conditions such as pH excursions, process leaks, copper throw, etc.

More recently, RPSI chemistry was shown to be capable of passivating lightly rusted surfaces to a degree comparable to that obtained on a fresh steel surface**** . The data indicated RPSI chemistry enables passivation of new equipment on-line without a separate precleaning step for lightly corroded metal surfaces. It also allows water systems that have experienced moderate corrosion resulting from upset conditions to be effectively re-passivated and treated without removing them from service. It also showed RPSI chemistry to be superior to traditional polyphosphate, organic phosphate, ortho phosphate, molybdate, and nitrite-based treatments in terms of forming a passive film on the rusted mild steel surface.

Both scenarios hindered reliable operation of cooling systems and thereby adversely impacted the operating performance of the plant. The plant had to regularly clean the heat exchangers, which resulted in loss of production due to downtime. It also adds costs for cleaning.

In late 2015, the plant began using FlexPro technology with RPSI corrosion inhibitor chemistry to mitigate corrosion and scaling issues. An inspection in 2017 showed much cleaner heat exchangers. The level of iron and copper in the tower also declined, which indicated the technology was providing adequate corrosion/scale inhibition. Also observed were improvements in heat exchanger heat transfer efficiency. 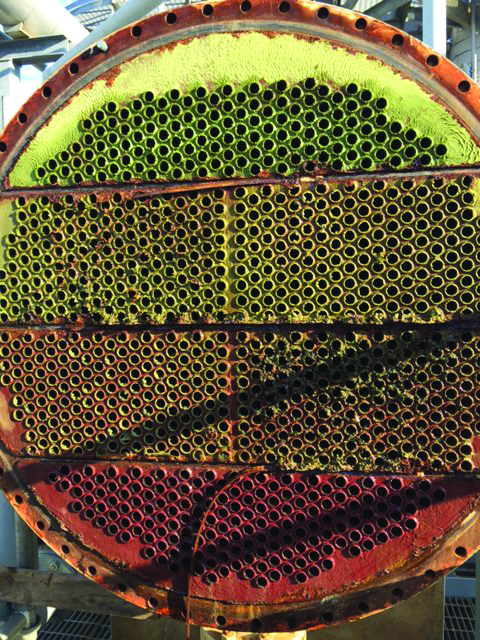 A phosphate-based water treatment program at the chemical plant resulted in a heat exchanger with severe calcium phosphate deposition and possible biofouling. 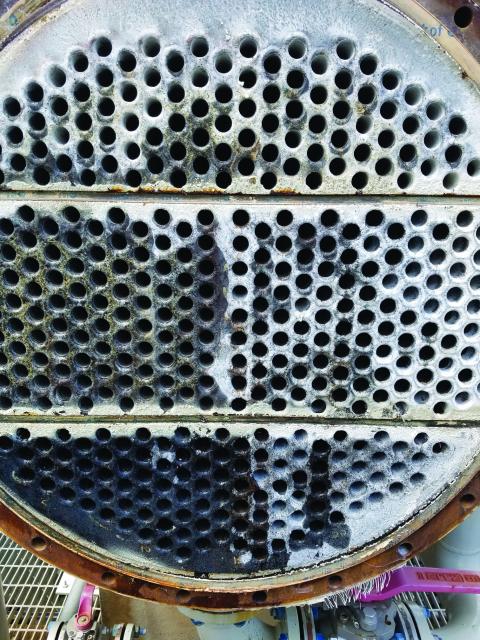 Shown is another heat exchanger at the same chemical plant, which is free of corrosion and scaling when cooling water was treated using FlexPro technology.

ChemTreat added a proprietary halogen stable triazole technology to the water treatment program at the same plant later in 2017, which improved the yellow metal corrosion rate. In addition, iron and copper levels were maintained at historically low levels.

Since implementing the technology, the chemical plant began moving from a from a yearly plant turnaround cycle to a two-year cycle, improving profitability. Additionally, the program resulted in improved process cooling system efficiency and reliability.

Headquartered in Richmond, Virginia, ChemTreat is one of the largest and fastest-growing industrial water treatment companies in the world. Continued expansion has allowed us to evolve into one of the world’s largest providers of water treatment products and services. ChemTreat has grown to become a leader in the water treatment industry and is committed to continued growth. We retain the flexibility of the smaller companies to meet specialized needs through a rapid and thorough response in all areas of the business, and we have the significant resources of a larger company to ensure superior customer support. Our proprietary solutions allow our customers to reduce water, chemical, and energy costs, extend asset life, improve process operations, and reduce downtime. For more information, visit www.chemtreat.com.

All photos courtesy of ChemTreat