Oil-free refrigeration compressor technology offers significant benefits in terms of efficiency and performance. Eliminating oil from the system can yield up to 40% improvement in part-load efficiency compared to fixed speed screw compressors. And, this performance improvement can be sustained over the life of the compressor since oil-free compressors incur no mechanical wear during operation.

While long-term performance is a key advantage, there are additional benefits of oil-free compressor technology in terms of maintenance. Removing oil from the chiller system results in a simplified chiller design that eliminates frequent maintenance tasks required on traditional oiled chiller systems.

A chiller with an oil management adds a significant number of additional components and design complexity to the system. A typical oil management system includes components such as an oil separator, which separates the oil from the refrigerant; oil cooler, which reduces the temperature of the oil because hot oil loses some of its lubrication properties; oil heater, which boils off refrigerant from the oil to prevent dilution; and an oil pump, which circulates the oil through the system.

A chiller using oil-free compressor technology, however, has significantly fewer mechanical components and design complexity since all the components associated with the oil management system are eliminated. This results in reduced maintenance and higher reliability over the life of the chiller. 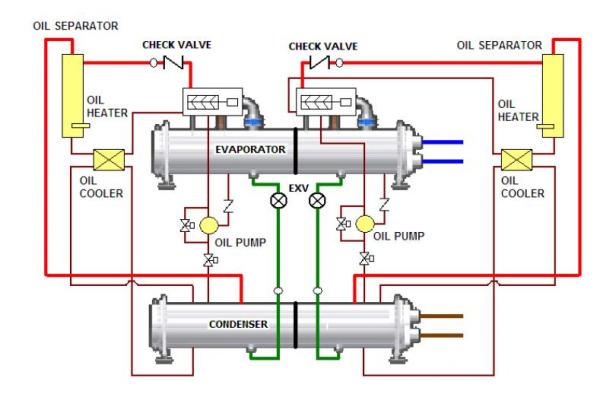 Shown is a chiller with an oil management system. 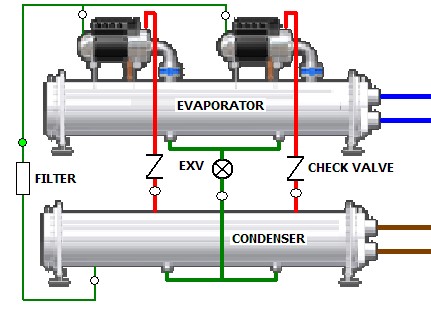 The following maintenance tasks are required on traditional oiled chillers but no longer required on oil-free chiller systems:

Frequency: Daily. Maintaining the correct oil level is one of the most critical tasks on a traditional oiled chiller system. Similar to a car with an internal combustion engine, improper oil levels can have catastrophic consequences to the reliability of the chiller. Low oil levels can result in damage to the bearings and motor shaft while excess oil can significantly degrade the efficiency of the chiller. In fact, an independent study conducted by ASHRAE Research Project 751-RP found the majority of chillers installed in the field have excess oil beyond the recommended charge levels which further degrades performance.

Frequency: Annually. Changing the oil on a regular basis is needed to ensure the quality and reliability of the oil is maintained. Oil that is contaminated with foreign objects can result in significant damage to the compressor. The typical cost: $1,600 each change (excluding disposal fees).

Frequency: Biannually. An oil filter is required on a traditional oiled chiller system to filter contaminants in the oil circulating in the system. A clogged oil filter will prevent oil circulation in the system and can result in foreign objects damaging the compressor.  The typical cost: $1,000 per replacement.