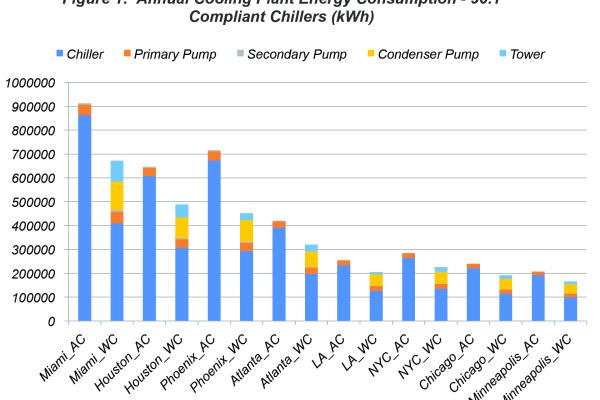 The Impact of Water Utility Rates on Chiller Selection

Do water-cooled chiller plants still deliver lower utility bills? Today, many chiller plant energy analyses carefully account for energy costs, and even energy escalation rates – a factor that projects how fuel costs will increase over time, while ignoring water and wastewater costs associated with cooling towers. While highly effective at transferring heat, cooling towers consume millions of gallons of water each year through the process of evaporation, drift, and blowdown. With the rising cost of water and wastewater, this omission can result in an incomplete picture for the building owner.

Absorption chillers have been around for more than 75 years, with several thousand chillers operating successfully all over the world today. Yet myths about cost, operation and performance surround this technology, particularly in North America. Look beyond the myths and you’ll discover absorption cooling technology can be efficient, cost-effective, flexible and reliable.
More Articles >

When a cooling tower supporting the HVAC system at NYC Health + Hospitals/Lincoln was nearing its expected end of life, the management of the 362-bed hospital in the South Bronx saw an opportunity. The year before, the neighboring community had experienced outbreaks of Legionnaires’ disease, and even though the hospital’s cooling towers played no role in those outbreaks, the chance to increase protections against possible future exposures of the bacteria that cause the disease was an important consideration.
More Articles >

There are six basic types of cooling systems that you can choose from to meet the cooling needs of your load. Each one has its strengths and weaknesses. This article was written to identify the different types of cooling systems and identify their strengths and weaknesses so that you can make an informed choice based on your needs.
More Articles >

This article contains pieces from an audit report developed for a fish processing plant located in Yangon, Myanmar. It is located in the Thinbawgin Ward of Dawbon Township in Yangon, Myanmar.  The objective is to show factories the information they may want to have gathered on their refrigeration systems and supporting cooling systems.
More Articles >

Field-erected evaporative “wet” cooling towers, combined with heat exchangers, are an economical and efficient method to dissipate large heat loads at oil and gas refineries and chemical processing plants – as long as they’re free of harmful debris. Yet many cooling towers at these facilities are highly susceptible to poor performance and costly downtime due to problems associated with debris buildup and potential for debris to pass by traditional stationary water screens during the cleaning process, clogging heat exchangers.
More Articles >

We are certain it comes as no surprise to the readership of this journal that a third of the total energy end use for commercial buildings in the U.S. is consumed by HVAC (DOE 2008). Chillers are usually the single largest individual user of electricity in commercial and institutional HVAC facilities. Maintenance and engineering managers have three primary options to improving chiller performance: replacement, control strategies and maintenance. As chillers are required to reject heat to complete the vapor-compression cycle, a condenser heat exchanger is used which allows heat to migrate from the refrigerant gas to either water or air. Heat transfer has the greatest single effect on chiller performance.
More Articles >

The chilled water is generated in the central plant and then transported through a piping network to cooling coils (air handlers), or to point of end-use in processes. Facility directors and energy managers are always chasing multiple goals - satisfying all the customers, maintaining a high-level of reliability and minimizing energy spends with varying demand and weather. Therefore, many modern plants employ a good chiller optimization package such as Hudson Technologies’ SMARTenergy OPS® in conjunction with Building Automation Systems (BAS) to optimize the chiller plants.
More Articles >

Cooling Towers: Finding the Right Fill for Your Process

By Bill Miller, P.E., Brentwood Industries, Inc
How often do you think about your cooling tower or the fill that provides the cooling engine for your process? Unfortunately, if you’re like many plant operators, your cooling tower is but one piece of equipment in your large facility, and its ranking on your priority list is probably lower than many other expensive and more intricate pieces of equipment in your plant.
[ Read Full Story ]

The State of Refrigerants in Commercial Chillers

By Kacie Goff
Snail mail. Rolodexes. Boomboxes. We’ve given up the familiarity of the past for the promise of the future. But is the same happening in the chiller industry? Is the push for lower global warming potential (GWP) refrigerants changing the industry as we know it? In some ways, yes. But, in the United States in particular, the change may be more gradual than it appears at first glance.
[ Read Full Story ]

A Review of Solid-Form Scale and Corrosion Inhibitors

By Michael Hunter, Global Technical Director, APTech Group, Inc.
Water treatment professionals understand that if applied correctly, solid-form products can be just as effective of a method to protect cooling and heating systems from corrosion and scale as their liquid counterparts. And with the additional sustainability, safety, ease of use, and shipping cost benefits of solids, hundreds of facilities are transitioning to these products each year world-wide.
[ Read Full Story ]

By Jerome Jennings, SPX Cooling Technologies, Inc.
Gearboxes are used as speed reducers to slow the rotational speed from the incoming motor to the outgoing fan of a cooling tower. Companies operating high-capacity production plants, such as those in the chemical process and power industries, require cooling towers with large amounts of heat rejection capacity. Without gearbox technology, cooling tower motors would be massive to directly handle the torque required by the fan. Something so large and heavy would be too expensive and impractical.
[ Read Full Story ]

By Adam Meyer, Sales Manager, Technical Systems, Inc.
The demand for advanced computing power rises year after year, but the more powerful the system, the more heat it generates. As data centers grow, they place higher demands on cooling equipment. Packing as much kilowatt and computer usage into as small a space as possible is key to reducing the cost and size of the facility. In doing this, data centers increase the power density of their systems, drawing more power, and generating more heat per unit area.
[ Read Full Story ]

By Dan Wheatley, CEM-BEP-CEA, President, Energy & Fluids, Inc.
ElectroCell Systems, Inc., manufactures a system for commercial, industrial and institutional facilities that is applied to conventional water-cooled chilled water plants. The system significantly improves efficiency in water and energy use with paybacks in the 2.0 to 3.5 year range. The system is not a substitute for chemical treatment; rather it is a Condenser Water Efficiency system, engineered specifically and solely to increase water and energy efficiency by addressing the uniquely challenging demands that exist only in the condenser water loop.
[ Read Full Story ]

By Chiller & Cooling Best Practices Magazine
If you enjoy the occasional beverage from an aluminum can, there’s a decent chance the can was made by Ball Corporation, a container manufacturing giant with facilities across the world. The company’s facility in Saratoga Springs, New York, services beverage companies throughout the northeastern United States. The plant operates four production lines producing millions of aluminum cans per day.
[ Read Full Story ]