Free-cooling systems are not new although differences in design efficiencies exist. Partial-mode, free-cooling, which is fully automated and integrated into the chiller system is. Traditional free-cooling systems are “all or nothing” systems where the process fluid is either cooled by low temperature ambient air or by the refrigeration compressors. An innovation in free-cooling has been developed with the introduction of partial-mode free-cooling, allowing for a significantly broader range of application temperatures and significantly increased energy savings.

A total free-cooling system, normally used only during very cold winter months, takes advantage of low ambient temperatures to cool the fluid (water) in the circuit in what’s known as a dry cooling system (ambient air to water heat exchanger). The evaporator (refrigeration to water heat exchanger) is bypassed and the refrigeration compressors in the chiller are OFF and energy is saved.

The process cooling system will automatically switch to the total free-cooling mode, when ambient temperatures are in a range up to 18 °F lower than the required fluid outlet temperature. Under these conditions, all the refrigeration compressors, in the condensing section of the chiller, will be switched OFF. Under even lower ambient temperatures, the electronic controller reduces step-by-step the rotation speed of the fans of the free-cooling section, all the way to shutting the fans down under extremely low temperatures.

In case the ambient temperature falls to extremely low levels, the 3-way valve modulates and will by-pass part of the flow by mixing it with the outlet fluid from the coil, always maintaining the perfect control of the fluid outlet temperature.

Traditional free-cooling process cooling systems will stack heat exchangers (the evaporator and the ambient air-to-water heat exchanger) with both connected to one set of oversized fans able to provide free-cooling and support the condenser.

MTA Process Solutions, has introduced partial-mode free-cooling. This allows free-cooling to offer it’s energy-saving benefits to applications experiencing the ambient temperatures often seen during the transitional seasons of Fall and Spring. Integrated into one chiller system, the system automatically decides, based upon ambient temperatures, whether to operate as a chiller or as a partial or total free-cooler.

Partial-mode free-cooling is made possible by separating the chiller and free-cooling systems – each heat exchanger sets using their own fans. In the partial free-cooling mode, the system starts to “free” cool when the ambient temperature is 3.6 °F below the fluid inlet temperature. Water is routed via a three-way valve first to the free-cooler and then it goes to the chiller. The controller automatically reduces the work of the compressors by throttling the cooling capacity by controlling the 3-way valve (which controls where the inlet water goes). During the transitional months of Fall and Spring, free-cooling acts as a pre-cooler and significantly reduces the work (and energy consumption) of the chiller.

Case Studies from the Northeast U.S.A.

Scales Industrial Technologies helps industrial and medical clients maintain the reliability and quality of chiller, blower, vacuum and compressed air systems – while always keeping an eye out for how to reduce a client’s operating expenses.

A growing plastic injection molding plant needed 65°F water to cool their plastic molds. The existing chiller system wasn’t going to be able to handle the growing demand for chilled water, and the plant was receiving proposals for new chillers.

“While the maintenance manager and I were discussing the air compressor system design for the new facility, we were leaning on the existing chillers inside. I just happened to notice that the chiller fluid temperature was 65 °F and it was only 20 °F outside and snowing,” Copell explained, “I asked if they would consider a proposal for a high efficiency, cycling free cooling chiller. I explained that this type of packaged chiller would utilize the outside air to cool their process for at least five months out of the year which would save them considerable operating costs.”

To make a long story short, the client installed an MTA free-cooling system using both partial and total free-cooling modes. The local utility helped finance the purchase, and the simple ROI was achieved within 14 months.

The success and growth of a company will place strains upon the utilities required by the facility to support production equipment. A manufacturer of point-of-use commercial and residential water heaters required cool water to test their heaters. The existing testing method used four five hundred gallon tanks supplying approx. 70 °F water to the heaters being tested. The water would return to the tanks at 140 °F. They would then add city water to temper it and try to bring the temperature down.

“The factory was consuming significant amounts of city water while delivering inconsistent water temperatures to the test lab,” according to Mr. Copell, “We installed a MTA free-cooling system with one glycol loop and we’re running on free-cooling 6-7 months a year.” The project qualified for incentives from the local utility. The plant has also reduced their water consumption, the cost of their sewer bill – all while improving the quality and reliability of their test process by now delivering a consistent 65 °F water temperature to the lab.

A Case Study from the U.K.

A large company wanted to replace the existing chiller systems on two three-story office buildings at their main campus. They run a 24-hour, seven day a week operation and needed an air conditioning system to match. The old system was out of date, oversized and did not have the capacity to handle the requirements of modern air conditioning.

The MTA chillers offered the client reduced noise levels, due to the availability of three differing acoustic versions. There are high EER levels, especially at part loads (ESEER). They are ideal for large hydronic air conditioning installations in public and private surroundings and allow start up and operation even in the most severe conditions.

The engineering contractor was looking for an ambient temperature in each room of 68-69 °F. The customer wanted the most energy efficient, cost effective and easy to install solution – so they decided to replace the existing roof-top chillers with MTA chillers featuring 9 and 12 compressors each, delivering chilled water for air conditioning. Importantly, the MTA chillers featured integrated free-cooling.

The MTA distributor realized free-cooling would make a significant difference in cutting energy bills for the client. The chillers were designed with a water temperature of 54 °F. Here the system cut-in with free-cooling at two degrees below this level. When this happens no refrigerant is required and energy use begins to tumble. The MTA distributor estimated this could lead to energy savings during the winter months of as much as 70 percent. During the warm summer months, the system can offer savings of up to 40 percent.

The first system was installed over the Easter weekend by the MTA Distributor. Two McQuay 1Mw chillers were replaced by:

The new chillers were installed, fixed to the water and electrical circuits, and commissioned ready for the start of the working week. The new chillers run on R410a, replacing the outdated R22. Each MTA system offers remote monitoring.

The free-cooling showed its’ worth immediately. During the first week the building was cooled by the free-cooling system only, as the temperature outside was very cold – saving seventy percent in energy costs. Since then whenever the ambient temperature has reached 68 °F there have been energy savings of at least forty percent over the prior system. 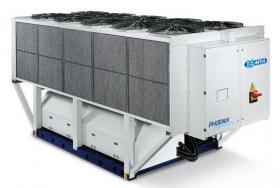 The use of free-cooling technology allows users to reach a reliable pay-back time on the investment compared to traditional water chillers. Depending on the weather conditions and on the fluid temperatures, the return on investment is almost always close to one year. An innovation in free-cooling has been developed with the introduction of partial-mode free-cooling, allowing for a significantly broader range of application temperatures and significantly increased energy savings.