Chicago’s Midway International Airport (MDW) has changed a great deal over its 94-year history. MDW occupies one square mile located south west of downtown Chicago. From its dedication in 1926 as Chicago Municipal Airfield, the airport was Chicago’s primary airport until O’Hare Field and eventually O’Hare International Airport (ORD) opened in 1955 and MDW was one of the world’s busiest airports during that period. In 1949,the municipal airfield was renamed in honor of the Battle of Midway and has been operating since under that name.

Since its inception, MDW has seen growth in air travel. To handle the increased passenger volume and modernize the airport, a larger terminal went under construction in 2000 and was completed in 2004 as part of a terminal development program. The program also included a new Central Heating and Refrigeration Plant (CHRP), which was completed in 2000 to serve the increased cooling and heating needs of the new terminals. The CHRP was a separate contract from the terminal modernizations and was awarded using a third-party design build contract. Unicom Thermal Technologies (UTT) was awarded the project with Hill Mechanical Group (HMG) as its contractor. UTT was an unregulated subsidiary of the local electrical company, Commonwealth Edison (ComEd), which at the time owned and operated the downtown Chicago district cooling system. The downtown system has been bought and sold several times with Enwave USA as the current owner. Eventually, the MDW CHRP was purchased by the Chicago Department of Aviation (CDA) which operates both MDW and O’Hare International Airports.

At the time the CHRP was constructed, Chicago had some of the highest electric rates in the country hence, the new CHRP was designed to economically provide comfort cooling using an ice-based partial shift thermal energy storage tank. Two (2) rotary screw ice chillers delivered R-22 refrigerant directly to the 14,000 ton-hour external melt ice tank. Two (2) nominal 1,655-ton centrifugal water chillers worked in tandem with the ice tank (1,590-tons peak hour tank capacity) to provide a plant peak capacity of 4,900-tons. The screw compressors also had a remote refrigerant to water heat transfer skid that could be used in an emergency to generate chilled water, just not as efficiently as the water chillers.

In the normal operating mode, the water chillers cooled 58°F return water to ~41°F prior to blending it with the ice tank water to deliver 34°F chilled water supply to the terminals. The operating scheme was to make ice at night when the electrical rates were cheaper and melt it during the daytime with support from the water chillers. The plant has operated successfully for 20years under this scheme.

Redundancy was a critical criterion for plant operations since the airport was essentially operating 24/7 from April through November (the CHRP is a seasonal plant since the terminal air-handling units (AHUs) have outside air economizers, but it could also operate during the winter if needed). Therefore, the plant was configured with redundant pumps and several emergency modes of operation to provide redundancy in the case a water chiller malfunctioned, including the refrigerant to water heat transfer skids that could deliver 36.5°F or 41°F chilled water (dependent on water flow) as a backup for the water chillers.

The existing chilled water pumping scheme was a traditional primary-secondary configuration with constant flow primary with variable flow secondary pumping where the primary pumps were individually piped to each chiller. The condensing side of the plant had the water chillers using forced draft cooling towers and the screw chillers using forced draft evaporative condensers.

In 2008, the Illinois power market became deregulated and where customers could select from a list of multiple energy providers. After an initial period of keeping electrical rates artificially low, the rates increased dramatically again. Today, however, the rates are lower again and almost “flat” (only a small difference between on peak and off-peak electrical rates) since the City of Chicago negotiated a contract with the electrical provider. With lower electrical rates and little differential between on peak and off-peak electric rates, the CHRP was no longer fiscally efficient to operate and required further upgrading to reduce its operating costs.

As part of a 2018 airport modernization project, the CHRP was designated to be upgraded to better utilize the current lower electrical rate structure. For the second time in the CHRP’s history, a Request for Proposal (RFP) was issued for a Design-Build contract to complete the upgrades. The RFP was issued in early 2016 and was finally awarded to the original CHRP contractor, HMG, in 2018. HMG selected Burns & McDonnell as the Designer of Record for mechanical, electrical, and structural engineering for the CHRP upgrade project. The goal of the RFP was to make the plant more efficient while maintaining its robustness and reliability by configuring the plant to provide peak cooling capacity during several equipment failure modes. Therefore, the ice plant and its appurtenances were removed from the CHRP to make room for additional centrifugal water chillers since the ice plant was no longer the most efficient solution.

The existing electric centrifugal water chillers had undergone an extensive refurbishment just prior to the issuance of the RFP in 2016, so there was a strong preference to retain the chillers within the upgraded plant. The design team investigated multiple new chiller configurations including looking at different chiller technologies, quantities and capacities of chillers, and equipment configurations until a final solution was agreed upon by all stakeholders. The final solution was a team effort between HMG, Burns & McDonnell and the controls contractor, Inspiring Technologies Corporation (ITC), that configured the system into a series chilling, lead-lag approach.

The new solution modified the existing chiller operating conditions to take the return water from 58°F to 44°F for further chilling by the new lag chillers. The existing chillers were rerated to provide 1500-tons at peak conditions. The new lag centrifugal chillers were selected for 1700 tons of capacity at 44°F entering and 36°F leaving at peak conditions. The new chillers have remote mounted Variable Speed Drives (VFDs) for enhanced part load performance.

While the terminal cooling loads did increase due to the construction of a new Transportation Security Administration (TSA) security bridge over Cicero Avenue, the overall loads, with a 200-ton cushion for future growth, were reduced due to the removal of over 700-tons of pre-conditioned air (PCA) chillers and PCA AHUs system from the chilled water loop resulting in a new peak plant capacity of 4,700tons.

Once again, the plant equipment was selected for several operating scenarios to provide peak capacity upon the loss of any unit of production. In lieu of having redundancy of an entire chiller and cooling tower, the new layout incorporated the redundancy by oversizing the equipment and selecting them to operate in multiple emergency conditions. The new chillers were oversized so that any chiller, new or existing, could be lost and the peak capacity could be satisfied. Similarly, the cooling towers were oversized so that if a single cell was lost,  peak capacity could still be met. This concept was extended to the pumping systems so that any chilled water (CHW) primary and condenser water (CW) pumps could be down, and the plant could still produce peak capacity. 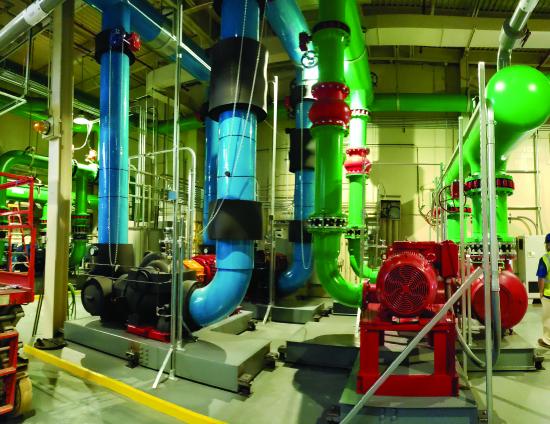 A total of three operating conditions were developed to ensure that the equipment was sized adequately so the CHRP could sustain a peak capacity of 4,700 tons. Figures 1 through 3 illustrate the conditions. Figure 1 illustrates the peak load Condition 1 or “normal” operations were all equipment is functioning routinely with the existing chillers totaling 3,000-tons and the new chillers totaling 1,700-tons for a total of 4,700tons. The figures depict existing piping and equipment as grey, and the new piping and equipment is depicted in blue. In this operating condition, there would be no flow bypassing either the lead or lag chillers. 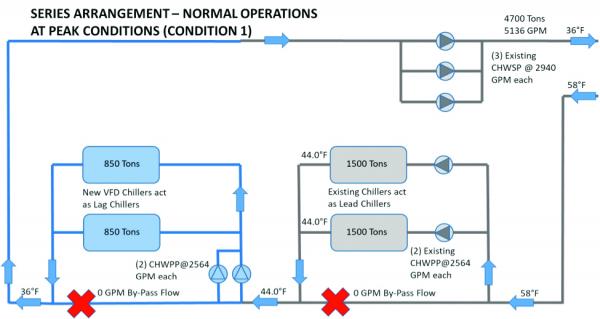 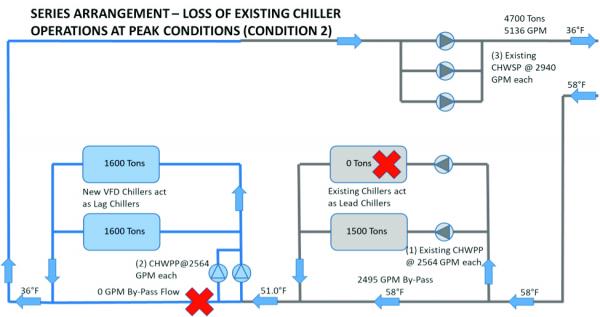 Figure 2 - Operating Mode if One Lead Chiller is Lost.

Figure 3 demonstrates the final operating condition when one of the new lag chillers is lost. The existing lead chillers see full flow and no change in load, but the remaining lag chiller sees twice its normal flow and is selected to preserves the plant leaving water temperature and capacity. In this case no water is bypassed around either lead or lag chillers. 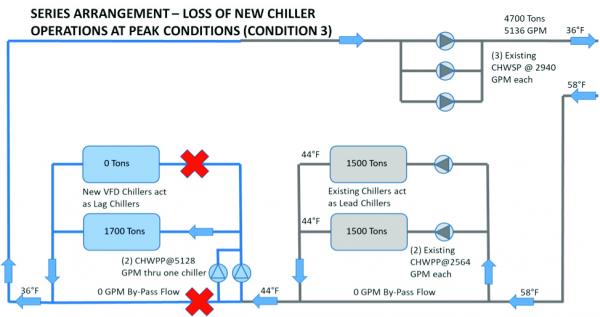 Figure 3 - Operating Mode if One Lag Chiller is Lost.

The chilled water portion of the plant was completed in April 2020 and the last cooling towers and condenser water piping were phased in by early 2021. The air travel industry was dramatically impacted in 2020 by the COVID-19 pandemic and saw historic reductions in flights. The flight reductions translated into a reduction in passengers and ultimately airport cooling loads. Further impacts to reducing the cooling loads were updates to the variable air volume (VAV) control system and reheat coil control valve replacement with pressure independent control valves which significantly reduced simultaneous heating and cooling loads. Hence, the upgraded MDW CHRP never reached its previous peaks to prove its performance during the summer of 2020. 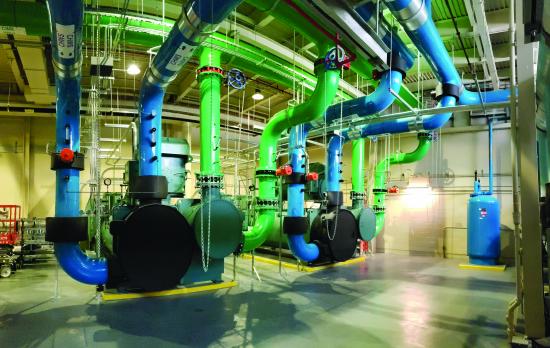 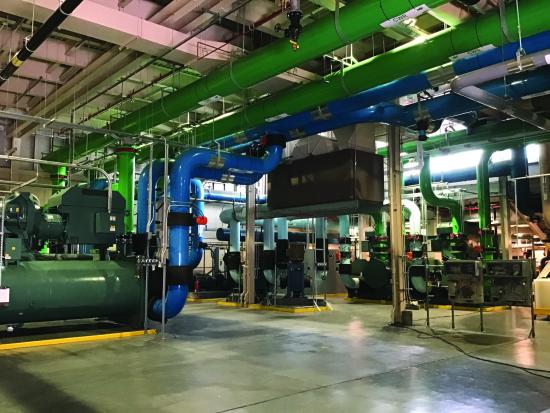 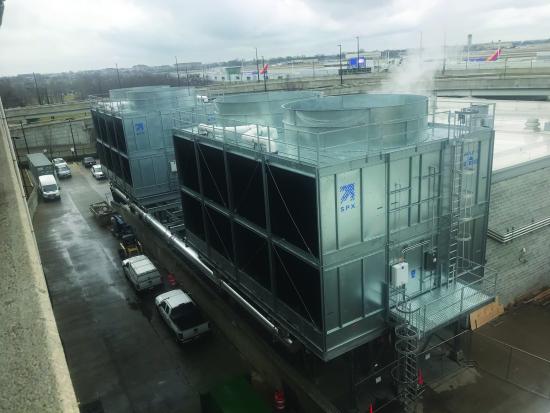 While the peak capacity performance was not proven during 2020 for MDW’s CHRP, what was confirmed was a dramatic reduction in CHRP electrical energy usage due to a combination of the aforementioned lower cooling loads and more efficient equipment that can better handle the lower loads. So, while it may be too soon to state that the CHRP upgrades were 100% successful, the operators are extremely happy regarding the efficient operation of the plant and the resultant reduced operating costs. These plant upgrades will facilitate MDW to provide comfort cooling to the passenger airport experience while operating with more efficient equipment to handle upset conditions for the next 20-years to come.

Steve Tredinnick, P.E., CEM, ASHRAE Fellow, is a Senior Project Manager at Burns & McDonnell with over 38-years of experience, where he specializes in district cooling and heating plants and distribution systems; campus utilities and utility master plans. Steve is a member of the International District Energy Association (IDEA) and is active in ASHRAE Technical Committees. He is also a co-author of the ASHRAE District Cooling Guide (Second Edition) and Owner’s Guide for Buildings Served by District Cooling.

About Burns & McDonnell:  Burns & McDonnell is a family of companies bringing together an unmatched team of 7,600 engineers, construction professionals, architects, planners, technologists and scientists to design and build our critical infrastructure. With an integrated construction and design mindset, we offer full-service capabilities with more than 55 offices, globally. Founded in 1898, Burns & McDonnell is a 100% employee-owned company and proud to be on Fortune’s 2020 list of 100 Best Companies to Work For. Learn how we are on call through it all.