The University of Cincinnati (UC) is a state-supported institution of higher learning and a public research university, founded in the early 1800s and the proud home of the UC Bearcats. The University serves over 47,000 undergraduate and graduate students, including 12,000 employees across the UC campus that spans over 200 acres and is located in the greater Cincinnati metropolitan area. UC operates two central utility plants (east and west) that serve the overall UC campus and also support six area hospitals. 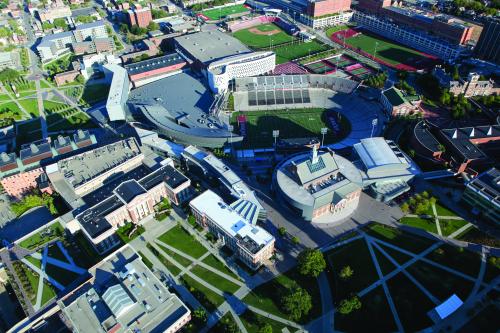 Like many universities across America, The University of Cincinnati had a major challenge having to operate aging central utility plants with older technology, reduced efficiencies and capacities, with chilled water equipment at the end of its service life. Even so, UC needed to maintain plant operations under diverse load conditions, including critical hospital utility demands that are currently expanding and in daily periods subject to energy tariff.

The University turned to Smardt Chiller Group, the global leader in oil-free, magnetic-bearing centrifugal chillers, and achieved a 32% reduction of kWhr in the new chillers' energy needs compared to the previous unit. This reduction primarily stems from the performance of the chillers’ Danfoss Turbocor® Oil Free Variable Twin Turbo (VTT) compressors that significantly increased production efficiencies and capacities while reducing maintenance costs. The compressors provide enhanced redundancy safeguards and part-load operation while reducing maintenance costs and streamlining management of equipment with a 30+ year service life.

To replace the aging 5,200-ton unit, UC ordered the first two of three Advanced Technology 2,400-ton Magnetic Bearing V Class Chillers from Smardt. The need was particularly urgent because the University’s chiller fleet supplies chilled water to a campus HVAC system that also covers a network of six hospitals and research centers, and any drop in capacity could greatly affect the comfort of patients and personnel – and, most importantly, patient lives. 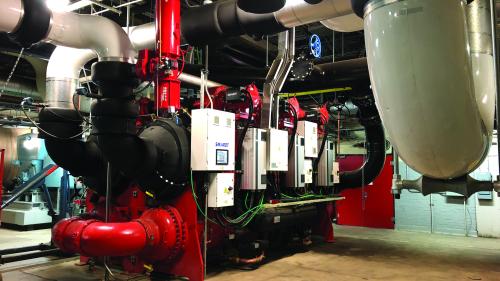 University of Cincinnati had another major challenge – the annual summer electric distribution ratchet tariff. The tariff is a surcharge that potentially boosts energy costs for the University from June 1 through September 30. If the new chiller wasn’t in place, University of Cincinnati could face significant charges. As a result, the pending fee established a hard deadline for the chiller installation, start-up and commissioning. The surcharge – levied by the local energy distribution entity and approved by the Public Utilities Commission (PUCO) – works by imposing a financial penalty for energy import from the grid. PUCO urges large-scale energy users like University of Cincinnati to find ways to reduce their penalty by lowering their energy use during the tariff season.

Despite those restrictions, Smardt helped University of Cincinnati meet this tight deadline. Following the chiller design and manufacturing process, the first chiller arrived on site May 29, 2019, and installation began immediately. Two days later, it went into operation – a day before the tariff season began. The second chiller was installed by July 1, 2019 and went into operation soon after.

Following their installation, University of Cincinnati purchased a third Smardt V Class 2,400-ton chiller and installed it in 2020 during the COVID-19 pandemic. The third chiller replaced a 28-year-old chiller the University removed from service. In a testament to the adaptability and problem-solving capabilities of the project team, University of Cincinnati, Smardt and Stoermer-Anderson, Inc. reconfigured this chiller’s design because a support beam inside the facility could not be moved.

Now fully in service, the three new chillers – which were painted crimson red and black in a show of school pride – represent about 15% of the campus chiller capacity while delivering significant energy savings over the previous units. These first three chillers mark the beginning of UC’s 10-year modernization program with next phases commencing in 2022.

The replacement strategy was to apply innovative technology for current and future demand requirements. The University must be able to deliver reliable utilities every day, all day while maintaining a 99.9% energy reliability rating in the provision of these utility services.

Upon installation of the first two chillers, University of Cincinnati began logging a substantial reduction in kWhr performance, including achieving a top performance of 0.27 kW/ton while averaging 0.36 kW/ton over their monthly operation. This bested the previous chiller’s established 0.68 kW/ton baseline. While a standard measurement of energy conversion, the kW/ton metric is also tied to the PUCO electric tariff, meaning the better the performance, the smaller the surcharge. Within the first nine months of operation, the units saved the University 1,588,000 kWhrs.

At one year of operation, University of Cincinnati reported:

By the two-year mark, which included the startup of the third chiller, University of Cincinnati saw continued improvements in operations, reporting:

“After the first full year, we were extremely impressed with the results of the first two chiller installations,” said Mike Hofmann, director, utilities & technical services, University of Cincinnati. “When we tallied the year-two efficiency numbers for all three chillers, our numbers climbed further – this made us very happy. Likewise, the good news continued with the projections through 2030, which continue to suggest tremendous savings long-term. Taking all these expected performances into account, we now predict return on investment (ROI) within four years of each chiller’s startup.”

Along with the reduced energy costs, the new chillers reduced the University’s CO2 output by 1,991 tons per year. This reduction is the equivalent of: 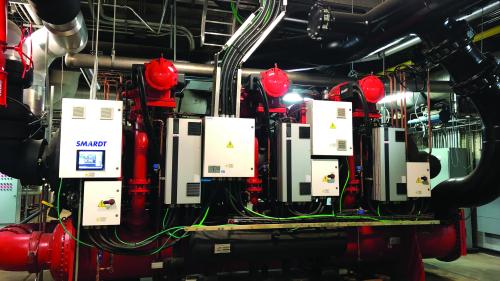 Danfoss Turbocor VTT1200 compressors enable impressive part-load performance
The primary energy savings in the new Smardt chiller units derives from the six Danfoss Turbocor VTT compressors used in each. Compared to other units, the Turbocor compressors operate on varying load conditions. Unlike the industry standard, each V Class Smardt chiller uses six 400TR compressors. Savings are achieved by running several compressors simultaneously at a lower load, rather than one or two compressors at maximum capacity. For example, if the chiller demands a load of 800 tons of refrigeration (TR), the chiller’s smart controls order three compressors to run at 267TR each, instead of pushing two compressors to 400TR. This is further evidenced in comparison to the existing 5200TR units where unloading down to these low part loads proves to be more challenging in operation and also yields lower efficiencies. The Danfoss Turbocor® VTT oil-free, magnetic bearing compressor technology eliminates complex oil and refrigerant lubrication management systems, resulting in a simplified chiller design, increased reliability and reduced maintenance. Chillers with multiple VTT compressors with Danfoss variable speed drives lower capacity by reducing the number of compressors operating to enable outstanding part-load efficiencies, while still operating reliably and offering enhanced redundancy.

During the initial survey of their operation, the chillers’ smart controls maintained the compressors within the highest efficiency of the compressor operating map I/O curve over 60% of the summer operating hours to achieve their energy use reductions.

Smardt’s six-compressor configuration is different than the industry standard, which usually calls for one or – at most – two compressors per machine. This configuration helped deliver the following results to University of Cincinnati:

The Danfoss Turbocor VTT compressors operating inside each of the chillers are critical to achieve the high level of performance sought by University of Cincinnati Utilities. Compressors, by far, are the most important component of any chiller unit, and Danfoss Turbocor engineered the HVAC industry’s first oil-free variable speed magnetic bearing compressor that simultaneously offers the highest full- and part-load efficiencies in the industry. Danfoss designed these compressors for OEMs as they strive to meet the stricter chiller efficiency requirements expected in ASHRAE 90.1-2016, using either Path A or Path B.

Further, these compressors meet the operational requirements of water-cooled or evaporatively-cooled chiller applications by offering nominal capacity ranges from 200 to 400 Tons (700 to 1430 kW).

After recording the operational results for the new Smardt Advanced Technology Magnetic Bearing V Class Chillers – namely a 32% reduction of kWhr demand, reduced CO2 emissions, lowered maintenance costs and a predicted short ROI – the project earned the Region III Innovative Energy Project of the Year (2020) from the Association of Energy Engineers. The University also won the International District Energy Association’s (IDEA) CampusEnergy 2020 Video Contest (https://www.youtube.com/watch?v=1AUiUEME5m0). UC has been named among “the top tier of the Best National Universities," according to U.S. News & World Report, and also named a “green university” by the Princeton Review.

“The results of this chiller project – from the quick turnaround by Smardt to the energy savings derived from the Danfoss Turbocor compressor configuration – helped us achieve the savings we wanted on the ratchet tariff,” said Hofmann. “Added benefits on CO2 performance and maintenance savings were great bonuses. Taken together, this project has exceeded our expectations and we look forward to continuing our successful partnership with Danfoss and Smardt.”

As phase I/II Smardt Chiller projects utilizing Danfoss Turbocor VTT oil-free, magnetic bearing technology are now completed, The University of Cincinnati is moving into the next phase in 2022 with both additional chillers and other utility plant equipment upgrades. The success of this project demonstrates the partnership between Smardt and Danfoss, and the contributions the Danfoss Turbocor VTT compressor technology provides for the Smardt V-Class chiller to ensure highly-efficient and reliable operation for the University of Cincinnati, its students, employees and the community at large.

About Danfoss
Danfoss engineers advanced technologies that enable us to build a better, smarter and more efficient tomorrow.  In the world’s growing cities, we ensure the supply of fresh food and optimal comfort in our homes and offices, while meeting the need for energy-efficient infrastructure, connected systems and integrated renewable energy. Our solutions are used in areas such as refrigeration, air conditioning, heating, motor control and mobile machinery. Our innovative engineering dates back to 1933 and today Danfoss holds market-leading positions, employing 28,000 and serving customers in more than 100 countries. We are privately held by the founding family. For more information, visit www.danfoss.com.