Acquiring those energy rebates, however, can be a complicated, dizzying endeavor — especially when it comes to industrial equipment and the sea of technical documentation that comes along with it. To get a better understanding of the process, I spoke with Panda Aumpansub, M.S.A.E., CEM, who is the Energy Solutions Leader at Havtech Inc., a supplier of HVAC and chiller systems based in Columbia, MD.

During our conversation, Panda shared insights about acquiring energy rebates by installing more efficient industrial chiller systems. As the Energy Solutions Leader at Havtech, she and her team of energy engineers have been helping companies execute incentive applications since 2010 with great results, including the acquisition of substantial utility incentives for both air-cooled and water-cooled chiller systems.

Not a Mail-In Rebate

While incentive programs provide rebate dollars, the term “rebate” can be an oversimplification of the process. You need highly technical information — about both the new chiller system and the facility’s energy and load profiles — in order to acquire the incentive. “Rebate” sells the process short.

“You cannot just go get the equipment and mail something in,” Panda explained. “It requires careful planning, installation and validation to achieve the energy funds.”

According to Panda, there are two different types of applications used to acquire incentive funding for new chillers — prescriptive and custom. Prescriptive applications are easier, and are necessary for simple projects that involve only one chiller. Custom applications are required for multiple-chiller projects, and the process is more comprehensive and time-consuming.

Prescriptive applications are short and sweet. If a building owner wants to replace a chiller, there are guidelines that indicate the qualifying attributes of the new chiller, including its tonnage, energy efficiency rating (EER or kW/ton), and integrated part load value (IPLV). If the new chiller meets those specifications, the utility company will provide a specified dollar amount per ton, depending on the size and the type of the chiller.

“It’s straightforward,” Panda said. “You look at the technical data of the chiller, and if it meets those requirements, then you know right away the specific amount of money that they will pay you back.”

Once the prescriptive application is completed and submitted, the utility company provides a pre-approval letter. The letter lets the applicant know how much funding he or she will receive with the purchase and installation of the specified chiller. After the installation, the utility company performs a post-inspection, ensuring that the chiller installed is the same that was listed on the application. If all goes well, the energy incentive check is sent. 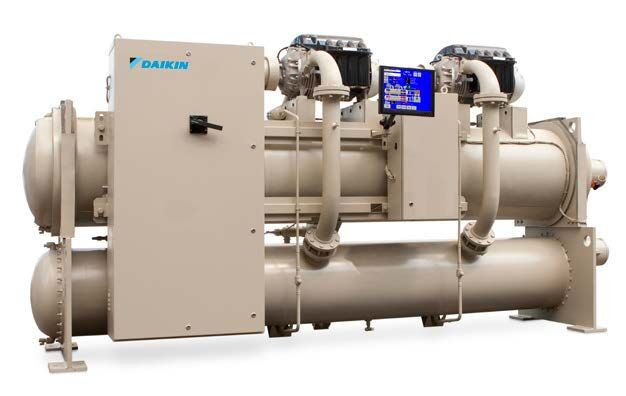 When it comes to multiple chillers running together, the application process becomes much more demanding. Since it is a complex system with many variables (control systems, mechanical systems, occupancy schedule, etc.), the corresponding application is just as complex.

“You can’t just look at each chiller separately, so the utility company has created the custom application program,” Panda explained. “You have to do an energy model of the whole building and apply actual chiller technical data and the sequence of operations in the model. You also need to know the plant load that the proposed chillers will serve to complete a full-year energy analysis.”

In addition, the custom application includes a technical review process, where a review board from the utility company evaluates all of the technical data and does an onsite pre-inspection. Once the back-and-forth of answering questions is finished and the utility company determines that the project is qualified, it sends a pre-approval letter, designating how much money the building owner will receive for completing the project.

While the prescriptive application may take up to two weeks to receive a pre-approval letter, it takes much longer to get pre-approved through the custom application process.

“When it’s a custom application, you have to go through the technical review, so it’s going to take six to eight weeks to complete, and that’s not including the engineering,” Panda told me. “The engineering going into creating the building energy model and to collect all of the data, along with the report for the application — that’s going to take two or three weeks.”

Once the custom application is finished, the validation period works just like the prescriptive application. You install the chillers, get them up and running, submit the invoices, and receive the check if the requirements are satisfied. The post-project inspection usually does not take longer than three or four weeks.

Selecting the right chiller for your operation is no picnic either — particularly when you are trying to identify one that will help you acquire an energy incentive. And, as Panda told me, there is no single factor that will help you decide.

“There is not one absolute answer, or one key factor, or one single point,” Panda emphasized. “That’s not how it works.”

Another important aspect of understanding the demand of your facility is determining its load profile. Since chillers are sized for 100 percent occupancy at the hottest time of the year, most chillers will run at part load conditions for the majority of their lifecycle. To select the most energy-efficient chiller for your facility, you need to determine how many hours the chiller will run at every part-load point. The weather profile at the building location will also have a major impact on how the chiller runs at part load.

To help visualize how the application process works, Panda was kind enough to provide a sample energy analysis that would accompany a custom application (Figure 2). In this case, the utility company was Baltimore Gas and Electric (BGE). The energy study provides a comprehensive look at two potential replacements for an existing, end-of-life, water-cooled centrifugal chiller. To meet the 450-ton cooling load of the high-rise apartment building, the customer has two options: 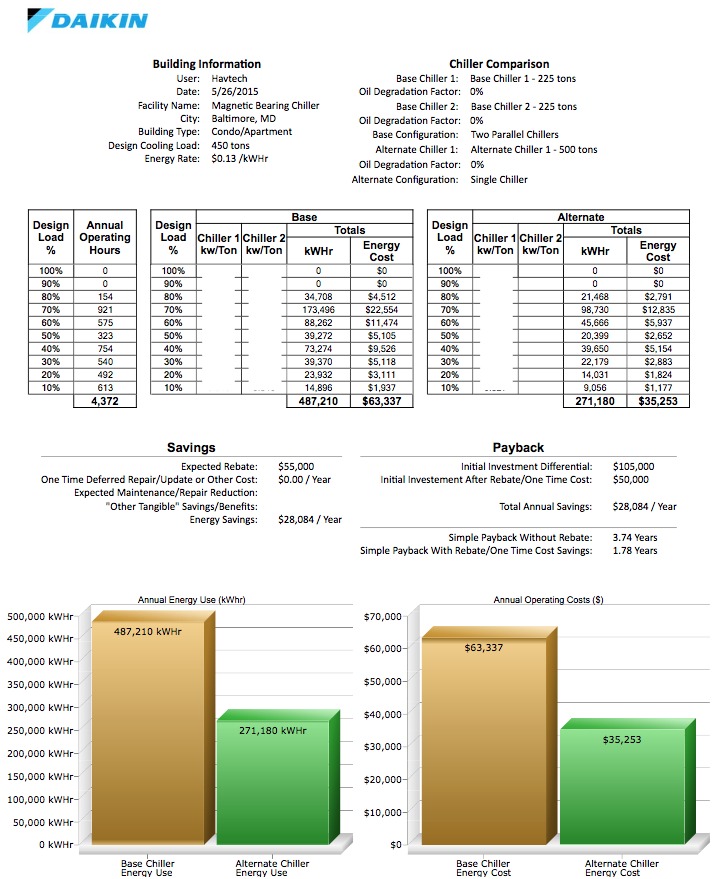 As you can see in Figure 1, the energy analysis provides an energy efficiency breakdown at each load, from 10 to 100 percent (To protect any proprietary information, the actual part load values have been washed from the document). The proposed magnetic bearing chiller would save $28,084 per year in operating costs, and the approved incentive would provide an additional $55,000 in funding. Without the rebate, the simple payback would be 3.74 years. With the rebate, however, the simple payback is reduced to 1.78 years.

Evaluating the Operating Costs of Chillers

Because water-cooled chillers are used for larger loads, their energy efficiency numbers can be deceiving to inexperienced eyes, as Panda explained:

“When you start with standard-efficiency chillers as a baseline, for example a water-cooled chiller’s kW/ton reduction at part load is 0.20 kW per ton, it looks like the number is so little in terms of energy efficiency improvement. But since it is used for such a large load, it saves a lot of energy.” 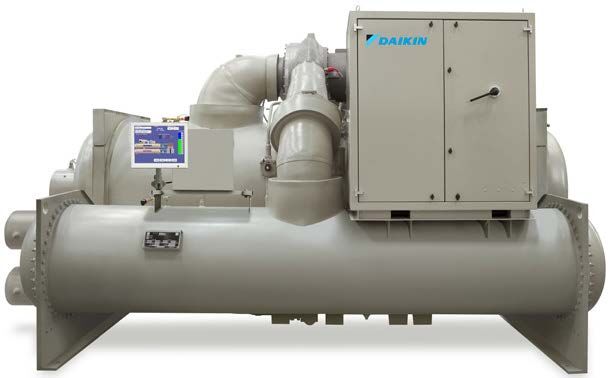 One of the most energy efficient water-cooled chillers is the magnetic bearing chiller. In these machines, the compressor uses magnetic lift to spin the core of the compressor, removing the need for oil. According to Panda, the oil in the machine results in losses in efficiency:

“When you have an oil machine, you lose efficiency along the way because your oils get older and older in the machine. So your energy efficiency drops over time.”

Not only does the oil-free operation eliminate losses in efficiency, it also significantly reduces maintenance costs. Oil-operated machines require an overhaul every 5 to 10 years, which can cost up to $50,000 depending on a chiller’s size. Frictionless machines do not have oil in the machine, so those costs are eliminated.

While there is not one specific measure that will completely fix your chiller system, Panda provided several recommendations to get you off the ground. Often times, retro-commissioning your chiller system to ensure that it is operating efficiently is a good place to start. Over Panda’s career, she has seen a lot of buildings where the facility engineers have designed the system to operate a specific way, only to have the system run differently and less efficiently after several years of use.

“Sometimes, with a different set of eyes, you can see something different,” Panda said. “Perhaps we shouldn’t be running two chillers at full load, we should be running three at part load because it uses less energy.” (This, of course, also depends on the specifics of the project.)

Additionally, Panda noted that chiller technology has improved dramatically over the past five to ten years, so facility managers with chillers that are older than 15 years should strongly consider replacing them. If you go through with the project now, while the rebates are still available, you can save a lot of money in capital equipment costs on an upgrade that may be mandatory in the near future.

“Right now, we see the core requirement [for rebates] is geared towards better, higher efficiency chillers to even get the permit,” Panda explained. “At some point it is going to be mandatory — and once it’s mandatory, I don’t know why a utility company would incentivize.”

In the end, it comes down to the building owner’s preference. It becomes a balancing act between how much rebate funding that person needs to receive, how much energy savings will be generated, and what the lifecycle costs for a new chiller system will be. The overall cash flow generated by the new chiller system is a strong influence on whether an old chiller is replaced with an expensive, high-efficiency chiller or a cheaper, minimum-efficiency type of chiller. Fortunately, utility incentives are around to help with the premium costs of the higher efficiency machines.