Controlled cooling is an essential part of manufacturing polyethylene stretch film. The process starts with granulated polyethylene raw product with very low strength, and develops thin, clear, strong film used in a variety of applications.  It does this by melting, extrusion, “casting” and winding.  See Figure 1 for a typical system diagram. “Casting” is forming and cooling at the same time. The extruded polymer is stretched and cooled on large, chrome-plated rollers with cooling water flowing inside. Thinner film is for manual use, like wrapping around food products. Thicker, stronger product is made for machine use, like automatically wrapping pallets of concrete bags.

Typical stretch film cooling systems include at least one chiller, since designers anticipate that some products might require coolant at a temperature lower than is achievable with an evaporative cooler. They also can include recirculation at each cooling roll. A typical plant has multiple cooling rolls per line and multiple lines, and change product on those lines. That requires independently adjustable coolant loops.

Plant ABC manufactures linear low-density polyethylene (LLDPE) film used to unitize packaging.  Two lines are run constantly.  Two 140-ton chillers are run all year.  They cool glycol solution from 53 to 49 degrees, which is delivered to the plant via insulated piping.  There are two lines with three cooling zones each, with typical control temperatures of 75 to 108 degrees F.  Temperatures are maintained at each zone via a recirculation pumping system, very energy-intensive.  See Figure 4 for an overall view and Figure 5 for a typical zone.  Processes are described in more detail in this article.  The process cooling system consumes about 182 kW average, about $90,000/yr, or 19% of facility energy use (about 1,500,000 kWh/yr out of 8,000,000).  Savings of about 67% of that can be gained by optimization (12% of total facility -  about 1,000,000 kWh/yr).

In this case, we are recommending an evaporative cooler sized large enough to cool the entire facility when the outside wet-bulb temperature is low enough, and controls to shift between the existing chillers and the evaporative cooler.  This is called “tower-free cooling”, or “economizer cooling”.  At this site, which is a fairly dry location, that freezes in the winter, that would be 75% of the year.  For plants in warmer and more humid environments, the economics will not be as good.  We are also recommending running the recirculation pumps for each zone at lower speed.

Table 1 is a summary of preliminary estimates of costs and benefits for the energy efficiency measures evaluated for this proposed project. Incentives may be available for the measures.  If both of the measures are implemented at one time, and the predicted savings are gained, an investment of about $158,000 will result in savings of about $54,000/yr and less than a 3 yr payback.  This is an attractive investment.

Plant ABC operates three shifts Monday to Friday, and keeps the two extruders running all the time except for full plant shut downs and brief product changes. Process systems at the site include extruders, process cooling, pumping, material transport, trim collection, and compressed air. Aside from the production and warehouse areas, the facility includes an office area and warehouse. Lighting and HVAC are not addressed in this Process Cooling Energy Audit.

The plant has been operating at full capacity since startup, and plans on increasing capacity as soon as they can justify the cost of a third extruder. A typical stretch film production process is shown in simplified form in Figure 1. The overall process cooling system is described in Figures 2 and 4. The chillers are providing 49 degrees all year long, even though the primary cooling process doesn’t require less than 75 degrees. Chillers are multi-stage and fairly efficient. Controls are up to date, except that both units are always running. This isn’t particularly inefficient. It just requires more maintenance than necessary, since one chiller can handle the load. Chiller pumps deliver glycol from the warm sump to the chillers, using VFD control. Process pumps deliver coolant from the cool sump to the plant, also with VFD control, set at 18 psig.

A typical “zone” for cooling one roll is shown in Figure 5. The recirculation system bleeds in just enough chiller water to maintain the desired roll outlet temperature. A small amount of coolant comes and goes to the chiller, controlled by a control valve, while most of the flow recirculates through the cooling roll. Excessive pressure differential on the recirculation pumps (and excess power consumption) occurs because the pump is developing more flow than required. They are oversized and are balanced against the system resistance of the cooling roll. This excess recirculation flow results in a temperature differential of only 1.0 degree F across the cooling roll. This low delta T is not adding any value to the process control. Doubling it to 2.0 degrees by running the pumps at about half speed would not even be noticed by the process. Temperature control would still occur by the mixing valves. 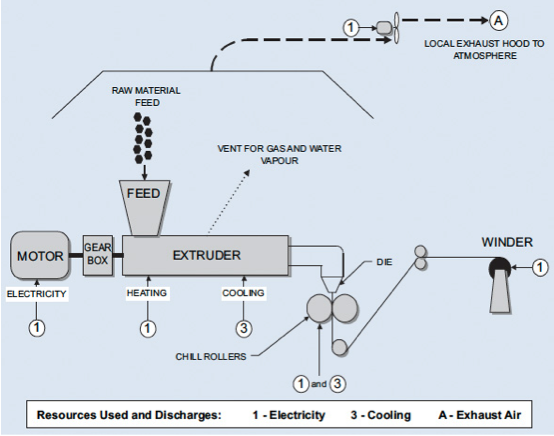 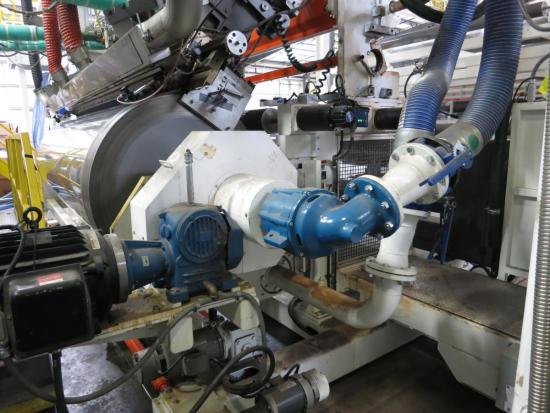 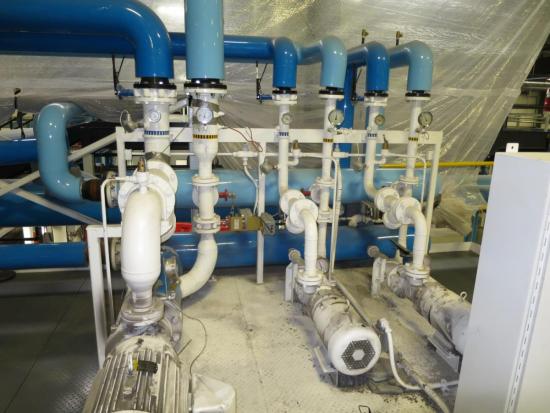 See Figures 4 and 5 for recommended improvements.  The recommended project includes the following components:

The energy required to cool using the “free” heat sink provided by nature, the condensing (or “wet bulb”) temperature is dramatic.  For the ¾ of the year that the evaporative cooler can handle the load, the energy requirement is less than 10% of the chiller power at the same heat load.  The recirculation pumps can be run at about half speed most of the time, requiring only about 15% power.  Additional benefits to the proposed improvements include reduced chiller maintenance and improved process control. 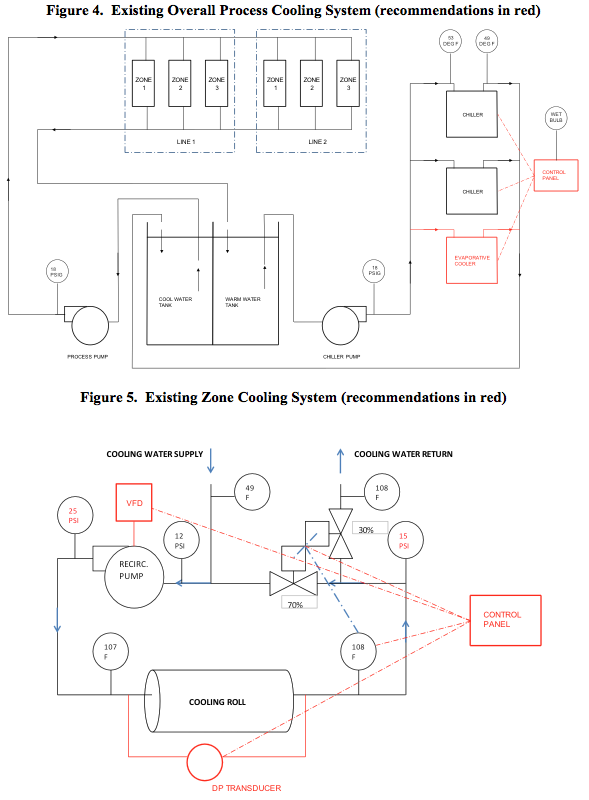 Total implementation cost of these measures is estimated to be between $140,000 and $160,000, depending on customer preference in measure selection. Estimated costs are shown in the tables below.

Tables 3-4 below show the estimated baseline and energy savings for the measures recommended in this project.

The addition of an evaporative cooler and tower-free cooling controls to a process cooling system can idle a chiller much of the year in dryer climates.  This can save over half the chiller energy.  Optimization of recirculation cooling systems can also be done saving over ¾ of pump energy.