In recent years, the HVAC industry has enlarged its vision from focusing on equipment efficiency measured in terms of ratings points at specific conditions to include a whole building perspective that uses models of year-long, real-world conditions. Accordingly, energy standards have adopted new rating methods to evaluate equipment efficiency during part-load operation.

In Part 1 of this two-part article series we examined how these standards are evolving. The article can be found at https://coolingbestpractices.com/technology/refrigeration-compressors/advancing-standards-and-equipment-improve-building-energy. This article looks at how technologies are advancing to deliver more part-load energy savings.

In the past, the HVAC industry had it relatively easy when it came to achieving high energy efficiencies at full load. Selecting the optimum heat exchangers and compressors usually sufficed in designing equipment to meet the required load. When it was necessary to run the system at less than full load, various low-cost techniques were applied to turn down capacity, such as hot gas bypass and compressor step modulation. But with systems optimized for full-load efficiency, this technique and others are inefficient, because the high compressor efficiency cannot be maintained at part load without capacity modulation to better match the load.

Designing systems to operate efficiently at part load, therefore, requires new thinking and a new set of technologies. The main idea is to apply technologies that can modulate capacity when encountering varying loads. 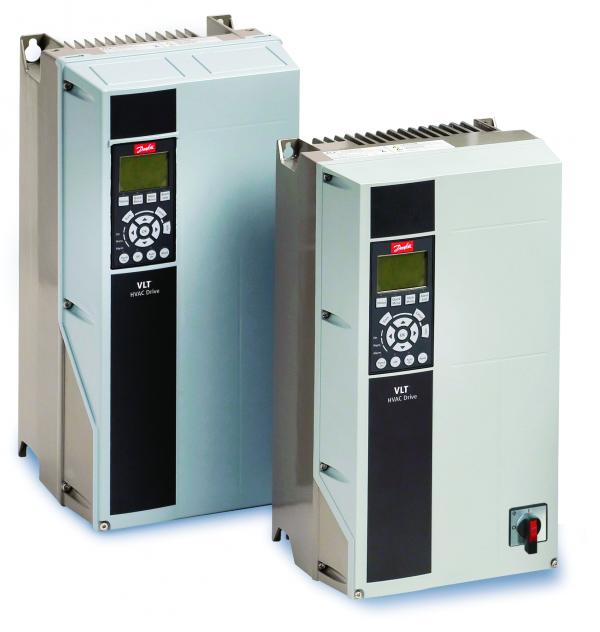 Substantial advances have been made in compressors, which are the primary energy users in chiller systems.

The first design approach was to be phased out by ASHRAE 90.1 in 2016 for systems above 65,000 Btu/hr., as regulators have recognized this design is an inefficient way to meet the building load throughout the year. It also reduces the lifetime of the compressor by constantly short cycling on and off.

The second design improves the system’s capacity modulation by essentially creating two systems that are half the size of the total system. This approach allows the use of two uneven circuits, which enable the system to better match varying loads. Also, this configuration improves uptime, because one circuit can function independently while the other is down.

In such a system, technology that can assist fixed-speed compressors to handle varying load and pressure conditions — such as Intermediate Discharge Valves (IDVs)— can further improve efficiency. Nevertheless, there are system designs that offer better capacity modulation and can capture more benefits from IDV technology, as well as other technology like variable speed fans.

Finally, variable speed compressors take the industry to the energy efficiency limit of what today’s compression technology can provide. The majority of these applications are single compressors on a single circuit, but they can also be applied in parallel with fixed-speed compressors to further increase the turndown ratio or achieve a specific capacity. Studies show this latter configuration provides superior capacity modulation while maximizing efficiency at partial loads.

New technologies have been developed to improve the part-load performance of fixed-speed scroll compressors. For example, the IDV helps the compressor respond to varying system load and pressure conditions, although the compressor itself doesn't change speed as conditions change. IDV broadens the pressure ratio to allow a compressor to be optimized for an increased number of applications. The ability of IDV to respond quickly to part-load conditions helps limit compression overshoot, which improves efficiency and also reduces mechanical stress on the scroll components.

Speed reductions that precisely match the load help reduce energy consumption — as much as 50% or more depending on the application. Less energy is wasted since the variable speed compressor delivers precisely the capacity required by speeding the motor up and down.

There are operational benefits as well. A VFD uses an inverter switching circuit to change incoming alternating current (AC) power to direct current (DC), which is then output as an AC-like sine wave that can modulate in a controlled fashion. Consequently, a VFD eliminates the big inrush of line voltage AC at startup. The resulting "soft start" reduces amperage draw, which extends motor life and reduces costly peak electric usage.

Variable speed compressors require sophisticated engineering, however. The compressor itself must be rugged enough to handle repeated acceleration and deceleration from 110% to as low as 10% of its full speed rating.

A major challenge in designing a variable speed compressor is maintaining proper oil circulation. With scroll compressors operating at low RPMs, for example, oil circulation is poor because the mass of refrigerant and oil flow is reduced at slower speeds. Consequently, compressor designers use dedicated internal systems to ensure adequate oil circulation as compressor capacity turns down. High RPMs present other challenges, including the higher speeds that put more stress on internal parts. To withstand the added stress, careful selection of the materials and the oil and wear is required to ensure compressor reliability. 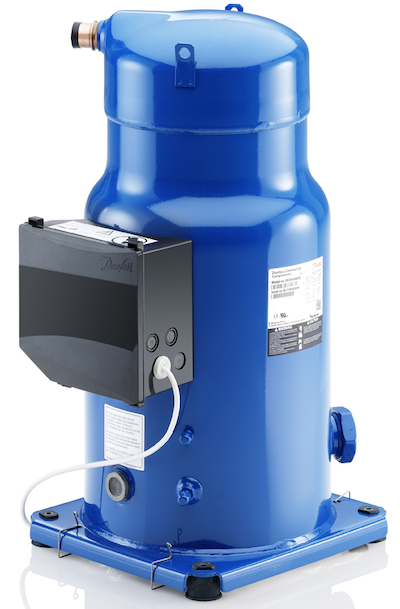 For advanced centrifugal compressors, however, other techniques are used to handle changing refrigerant gas pressures and flows at part load. Variable geometry inlet guide vanes and/or variable geometry diffusers are used to maintain compressor stability when refrigerant flow is reduced. As far as lubrication is concerned, magnetic bearings have been developed that allow the entire oil system to be jettisoned. With magnetic bearings, the compressor shaft rotates in a magnetic field without physically contacting the bearing in normal operation. This eliminates the need for an oil system and all its side effects —oil films on heat exchanger surfaces and oil stacking in the evaporator at low loads.

Technological advances have also boosted the efficiency of another major energy consumer —fan motors. As with compressors, the main energy-saving strategy has been to use conditioned DC instead of the incoming line voltage of AC to modulate motor speed.

ECM motors, also known as brushless DC motors, have been used for decades. They employ permanent magnets rather than brushes and electricity to create a magnetic field in copper windings. That feature alone makes them about 30% more efficient than "squirrel cage" AC induction motors.

To control ECM fan motor speed, however, integrated electronics must be used to continuously adjust RPMs based on control input. ECM motors operate at relatively lower power (below 750 kW) and are often used as external-rotor fan and blower motors.

Three-phase AC induction motors, however, remain the workhorse for HVAC applications. They are found in applications below 750 kW, as well as huge 1,500 kW motors for cooling tower fans. While AC motors are available with optional external speed controllers, they don’t always operate at optimum efficiency at slower RPMs.

For users, it is important to examine each application carefully to see what type of motor is most efficient — and what type of control delivers that efficiency in real-world conditions.

According to a major motor-manufacturer association, approximately 10% of the potential savings in drive systems can be achieved by using motors with higher efficiency. By applying variable speed technology, however, potential savings of approximately 30% can be obtained. The best means of attaining maximum savings (approximately 60%) is by optimizing the overall system. Using components that improve overall system efficiency makes major energy reductions possible.

For example, capacity modulation of variable speed compressors can only be obtained with an electronic expansion valve (EXV). An EXV allows condensing temperatures to be reduced to the lowest possible minimum, enabling capacity to be turned down. In contrast, thermostatic expansion valves (TXV) do not offer a wide enough dynamic range to allow the system to remain stable at low pressures. As a result, higher condenser temperatures must be maintained, which wastes energy.

For fans, efficient operation of ECM motors requires an optimal combination of frequency converter, motor, and fan impeller. Similarly, the algorithms in a VFD need to be tuned to match the individual application and motor to achieve optimum performance. Today, advanced frequency converters and VFDs are available with automatic tuning capabilities, programmable setpoints, and compressor/fan motor cycling to make system optimization at part-load conditions easy to achieve.

Today, contractors, consulting engineers, and building owners — in addition to HVAC OEMs and equipment designers — have a vested interest in technology optimized for part-load efficiency. Technologies that can turn down capacity to maximize energy savings at part load are financially attractive when energy costs are high. In addition, they provide further energy savings in milder climates, because these areas spend up to 99% of the year at part-load conditions. In those circumstances, when part-load technology is properly deployed, the actual energy efficiency obtained at real-world conditions exceeds the Integrated Energy Efficiency Ratio (IEER) or Integrated Part Load Value (IPLV) energy-efficiency rating printed on the equipment label. Regardless of energy prices, improvements in part-load efficiency reduce a utility CO2 emission, which addresses concerns about climate change.

New technologies are also being developed to improve whole building efficiency. These trends include connectivity and electronic devices, more precise system control and monitoring, and peak-load management tools. These developments will, in turn, drive further development and adoption of variable speed and other innovative technologies.

Advancing part-load efficiency in standards and equipment will significantly contribute to building performance, as well as nurture an energy-efficiency ecosystem of technology, standards, and policies that will grow energy savings and reduce CO2 emissions for years to come.

About the Author
Ben Majerus is Manager, Application Engineering, at Danfoss.

About Danfoss
Danfoss engineers advanced technologies that enable us to build a better, smarter and more efficient tomorrow. In the world’s growing cities, we ensure the supply of fresh food and optimal comfort in our homes and offices, while meeting the need for energy-efficient infrastructure, connected systems and integrated renewable energy. Our solutions are used in areas such as refrigeration, air conditioning, heating, motor control and mobile machinery. Our innovative engineering dates back to 1933 and today Danfoss holds market-leading positions, employing 27,000 and serving customers in more than 100 countries. We are privately held by the founding family. Read more about us at danfoss.com.

All images courtesy of Danfoss.