Gilpin Manor Elementary School in Elkton, Maryland, was nearing the end of its useful life. Building infrastructure was failing and existing spaces had fallen behind in supporting 21st century teaching and learning.

Cecil County Public Schools (CCPS) commissioned StudioJAED of Bear, Delaware, to design and engineer a new school, which features a HVAC system that combines several advanced technologies – all of which enhance the new school’s learning environment, while at the same time, exceeding energy-savings goals.

The original Gilpin Manor building had been in operation since 1952. Aged infrastructure, cramped learning spaces and a host of mechanical improvement needs all contributed to the decision to rebuild the school.

Opened in fall 2018, the new $19.3 million school building spans 65,837 square feet with a capacity to serve 500 students. The building serves students of pre-school age through Grade Five and is also designed to host groups of various sizes during summer months. It also serves as the campus gateway to the adjacent Elkton Public Library and the Elkton Middle and High Schools. 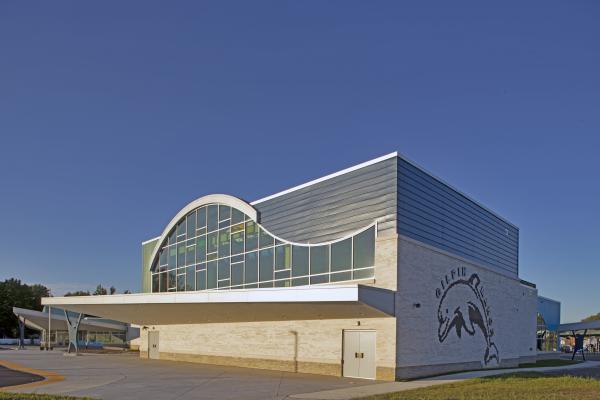 Gilpin Manor features the latest in design to support the best possible learning environment. Highlights include an integrated art studio with mirrors and rubber floors for activities and performances, hand-washing stations, extra space for community groups to use, motion-activated lighting, and many other aspects. In accordance with State of Maryland guidelines, it also meets Leadership in Energy and Environmental Design (LEED™) Silver certification.

Designing for Comfort and Energy Savings

Brian Zigmond, Vice-President with StudioJAED and the lead Mechanical Engineer on the project, said a number of factors contributed to the overall HVAC design. “School district officials were looking for a high-performance HVAC system that would deliver high efficiencies, good temperature and humidity control, and a low acoustical impact on the learning environment.”

Comfort cooling was a priority given high temperatures and humidity levels in the spring and summer. The firm’s goal for the HVAC system was to consistently regulate the air at a neutral 75oF (23.9oC), with 48% relative humidity (RH).

The overall design also needed to account for partial or segmented building use when school was not in regular session for things like hosting large groups in the gymnasium or library, limited after-hours uses, or office-only operation during the summer.

When designing the school’s HVAC system, StudioJAED worked with Building Systems & Services, Inc. (BSS) to specify a variety of advanced technologies to best address the overall cooling and heating goals of the building. Located in Wilmington, Delaware, BSS (www.bssinc.net) is a leading provider of commercial and industrial HVAC equipment, service and building automation systems. Mechanical contractor, Ralph G. Degli Obizzi & Sons, Inc. (www.degli.com) installed the system and is also based in Wilmington, Delaware. Primary components of the HVAC system include:

At the school, the central cooling system runs during shorter months in fall and spring. The system defaults to cooling mode when the school is in session and the outside air temperature is above 55oF (12.8oC). It typically does not run in summer when school is out of session to save on energy costs.

If cooling is needed in summer for groups, a separate system of high-efficiency stand-alone direct expansion air conditioning units cool the gymnasium and cafeteria, eliminating the need for the chiller to operate. In cooler months, the chiller is de-energized, and the central heating plant is in operation.

The system also uses a control valve to connect the secondary heating and cooling loops to a tertiary loop, which is used to supply tempered chilled and heated water to the chilled beams located in key areas throughout the school. Before the chilled water reaches the chilled beams, a three-way ATC mixing valve allows the system to combine warmer return water from the tertiary loop with cooler supply water from the secondary loop in order to supply water to the chilled beams at a setpoint of 57oF (13.9oC). A dual temperature water pump with a VFD is also used in the process.

The AHUs, chilled beams, and chiller work together to satisfy all cooling goals with each contributing to energy savings along the way. The AHUs provide primary air to the chilled beams as 100% conditioned outside air with full temperature and humidity control, while the chilled beams regulate the air temperature within each classroom or designated space. The chiller – in addition to supplying chilled water to the system – incorporates the use of a heat recovery module to provide hot water to the AHUs for the purpose of reheating the outside air in dehumidification mode.

At the school, the AHUs are used to bring in 100% outside air to meet building code ventilation requirements and handle the associated latent cooling load. This latent load control prevents condensation from occurring at the chilled beams which are designed to handle the space sensible cooling load. 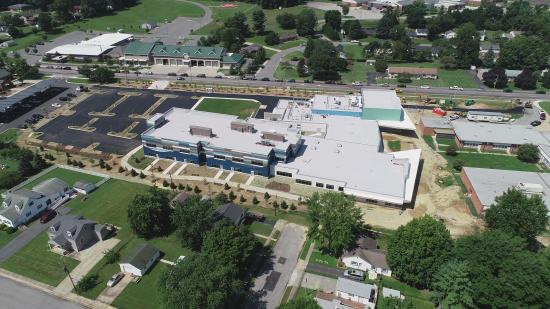 The AHUs are specifically engineered to supply a neutral air supply at a setpoint of 75oF (23.9oC) dry bulb and 48% RH to the chilled beams and directly to other areas of the school. They also use energy recovery technology that utilizes outgoing building exhaust air to precondition the incoming outside air. This heat recovery preconditions the outside air with the cooler exhaust air in warmer months, which lessens the load on the chiller. Conversely, the preconditioned warmer air reduces the load on the central heating system during cooler months.

The AHUs, in combination with chilled beams, also save energy given the efficiencies of moving energy with water versus air, said Zigmond. “Using air handlers to only supply the required ventilation air at the desired setpoint to the rooms and allowing the chilled beams to handle temperature control is much more energy efficient when compared to the energy required for traditional airside systems, such as Variable Air Volume, that rely on air as the primary heat transfer medium, which is a key energy-saving feature of the system.”

The StudioJAED team decided to install chilled beams in the ceilings throughout the school because they best met HVAC energy-efficiency goals while also providing maximum comfort – all with minimal maintenance requirements.

An active chilled beam is an air distribution device with a primary air intake and an integral coil. The primary air, which in this case is 100% conditioned outside air from the AHUs, is injected into a diffuser at a high velocity via nozzles. This creates a pressure differential which induces air from the space across the chilled beam coil.

At the school, the chiller, through the tertiary loop, provides the chilled water to the chilled beams. The AHUs, in turn, provide 100% outside air for ventilation. Active chilled beams eliminate terminal unit fans, reducing noise and eliminating parts to replace or maintain. In addition, since the coils provide sensible cooling only, there are no filters or drain pans.

In all, 136 chilled beams are located in the classrooms and the library, as well as ancillary spaces. The chilled beams are specifically used to manage the space sensible cooling load, which consists of the building envelope, as well as lights, computers and people occupying any given space. 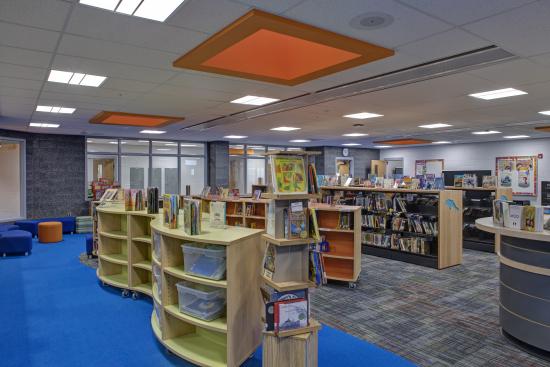 Active chilled beam units, such as three units mounted in the ceiling of the school’s library, provide comfort cooling with minimal maintenance requirements.

Zigmond said, “We introduced school district personnel to a previously completed facility our team had done with chilled beams, and they were exceedingly impressed with the quietness – in addition to the humidity control, and overall operational envelope – and wanted it for the educational spaces at Gilpin Manor.”

Given the importance of energy conservation, StudioJAED specified the air-cooled chiller with a heat recovery module given its ability to reduce the school’s overall energy consumption.
To do so, the chiller uses an integral heat recovery condenser as a separate heat exchanger to reject heat energy to the building’s heated water loop.

“We selected this particular chiller with the heat recovery module installed to minimize the runtime the boilers would need to operate in the cooling season,” said Zigmond. “The heat recovery module provides the bulk of the load needed by the air handlers to manage the dehumidification cycle and associated reheat for the supply air to the chilled beams.” 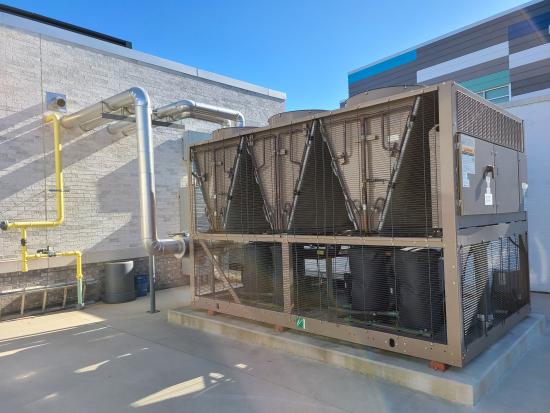 Shown outside at Gilpin Manor Elementary School is the air-cooled chiller equipped with a heat recovery module.

Zigmond added, “The heat recovery module can recapture up to 85% of the total heat rejection of the chiller, which offsets the need for the boiler system to simultaneously generate hot water.”

Since it began operation, the HVAC system at the new Gilpin Manor school has addressed the needs for comfort cooling – and at the same time – helps CCPS more than meet its energy-savings goals.

Zigmond said CCPS officials are delighted with the performance of the HVAC system in helping teachers and students stay comfortable so they’re able to focus on schoolwork. In the meantime, the HVAC system is projecting to deliver cooling and heating at approximately 17 kBTU/SF/Year – exceeding the established goals by over 30% and national average by 65%.

“The system met not only the client’s expectations, but ours as well,” Zigmond said. “This is one of the more sophisticated systems we’ve designed with the variety of equipment features interdependently working together to save on energy goals and provide a superior learning space.”

Zigmond said the HVAC system at Gilpin Manor served as the design prototype for another CCPS elementary school in Chesapeake City, Maryland.

“The performance of the system at Gilpin Manor made it clear this type of engineered system would work very well at Chesapeake City Elementary,” said Zigmond. “In addition to all of the comfort cooling and energy savings it provides, this also saves the school costs since the bulk of the proven HVAC system has already been designed.”

The new school in Chesapeake City is currently completing construction and is set to open for the 2020-2021 school year, setting up another group of students and staff to benefit from an optimal learning environment thanks to the HVAC design at Gilpin Manor.

All photos courtesy of Alain Jaramillo© with authorized consent of StudioJAED.