Eliminating Catalyst Cool Down as Critical Path in a Turnaround

As with most major process plants, refineries and petrochemical plants periodically need to shut down the entire plant or major portions of it for major maintenance activities. These time periods are referred to as ‘turnarounds’ and are time periods of intense activity. Once the plant shuts down, a considerable amount of money is being spent without any revenue being generated.

Operating temperatures in these processes can be very high. Once a plant begins an initial maintenance shutdown, all of this catalyst (often hundreds of thousands or millions of pounds) must be cooled from these high operating temperatures down to near ambient temperatures. Given the amount of catalyst and reactor metal mass, this takes time and is very often the bottleneck, or is on the ‘critical path’, for the entire turnaround. 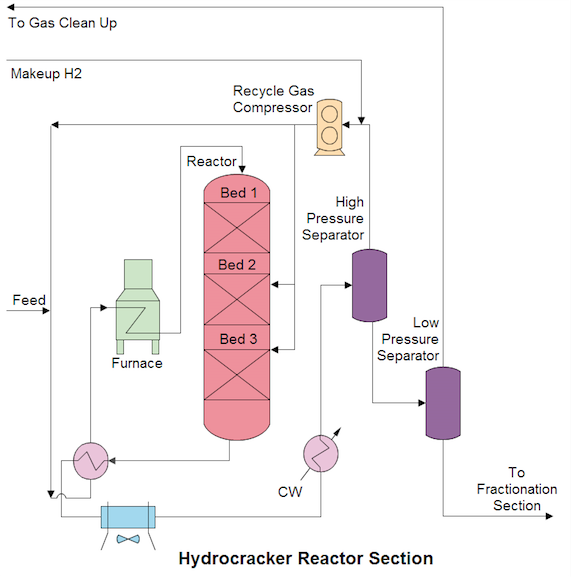 The normal cool down process generally consists of two distinct phases. During the first phase, feed is blocked in and the furnace is shut down. The recycle gas compressor circulates hydrogen-rich gas through the feed/effluent exchanger (if there is a bypass around the exchanger then it should be routed through the bypass), through the furnace (though the furnace is not operating), and into the reaction vessel where the gas picks up heat from the hot catalyst bed. The hydrogen gas is then cooled in fin-fans and a cold water exchanger before entering the high pressure low temperature separator (for this PFD; other units may have high pressure, high temperature separators and the cooling is only done on the gas stream and/or there may be low pressure low or high temperature separators where the gas is separated) before repeating the loop. This approach can be used until the catalyst temperature reaches a certain point – normally about 150 – 200 deg F. After that point, the rate at which heat is dissipated reaches a point of diminishing returns. However, it is still too warm for safe vessel entry.

Traditionally, the second phase requires purchasing liquid nitrogen with a vaporizer/feed system and injecting it ‘once through’ into the reactor system, with the nitrogen normally exiting to the flare system. Given the very large mass of the reactor metal and catalyst to be cooled, this operation generally takes several days.

Not only is this expensive due to the cost of purchasing liquid nitrogen, it becomes a logistic nightmare since it requires a constant parade of liquid nitrogen road tanker trucks coming in and out of the refinery. This is especially problematic during a turnaround when minimizing traffic density in the refinery is an important consideration.

In addition, this extra nitrogen is ordinarily relieved via the flare system, which lowers the calorific value of the flare gas. This can cause problems since the calorific value of the flare gas is subject to regulatory limits designed to prevent snuffing out the flare. If too much nitrogen is used, supplemental fuel gas, such as LPG, must be added and subsequently burned in the flare just to keep its calorific value within regulatory limits. Obviously, using LPG in this manner is economically wasteful since it could be recovered and sold. Another problem with nitrogen is that it consumes flare capacity whose primary purpose is to be available for emergencies and other process uses.

While relieving via the flare is the normal route, there are some refiners that relieve the nitrogen via the fuel gas system. Obviously, this creates a whole other set of problems since nitrogen doesn’t combust and just takes up space in the fuel gas system. Worse yet, it lowers the calorific value of fuel gas causing significant combustion problems in refinery furnaces. There are even other refiners that relieve the nitrogen straight to the atmosphere causing environmental problems.

For all these reasons, refiners and petrochemical operators are open to other ideas on how to safely speed up the second portion of the catalyst cool-down process without the costs or problems inherent with using purchased liquid nitrogen.

An Improved Solution - Cools Down Faster, Without the Need for Nitrogen

In order to overcome these problems during the Phase 2 cool down period, Aggreko has created an innovative, practical solution circulating coolant through an Aggreko-provided, closed loop, chiller system which cools down the gas leaving the recycle gas compressor discharge in an Aggreko-provided heat exchanger. This arrangement can cool down the catalyst much faster than if the plant had used liquefied nitrogen. This eliminates the need for costly nitrogen. 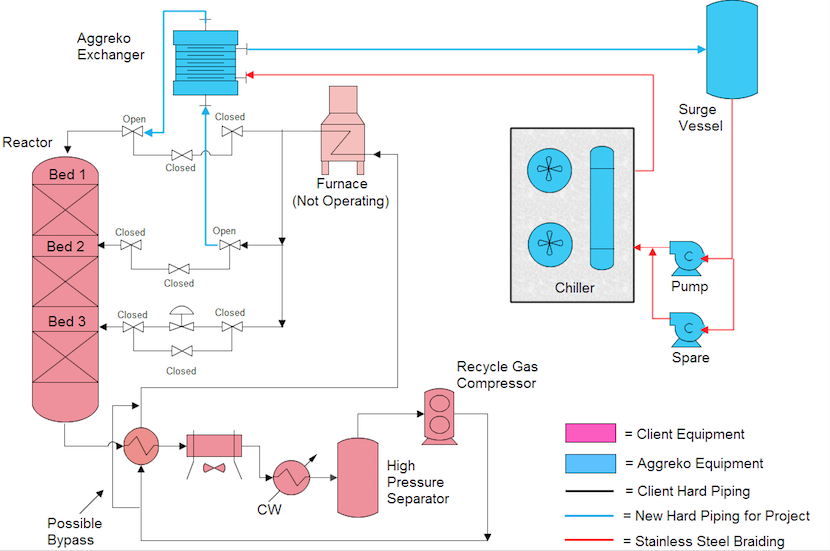 As the above diagram illustrates, the client’s equipment is denoted by the red or rose color whereas Aggreko-supplied equipment is shown in blue.

The following describes a typical process flow arrangement for the catalyst cooling solution, though there are likely many different alternatives depending on the actual client process equipment configuration.

On the client side, it is more advantageous to route material leaving the reactor around the feed/effluent exchanger. That’s because any additional heat picked up in this exchanger will need to be relieved via the Aggreko exchanger slowing the cooling process. After the feed/effluent exchanger material will tend proceed through the furnace. Since the furnace will not be providing any heat it just acts as a wide spot in the line.

The net effect of all these changes is to route gas from the recycle gas compressor discharge to the heat exchanger so that the coldest gas enters at the top of the reactor. It’s important to understand that the heat exchanger is placed downstream of the recycle gas compressor so that it cools the reactor gas further, but also to remove the heat of compression added during the compression cycle.

The black piping lines in the diagram are the hard piping that already exists for the client’s equipment. On the other hand, connections shown in red are stainless steel braided connections for the cooling water circuit.

Blue lines are hard piping lines that are added for this project. There is one hard piping line added that the client will make between the heat exchanger and the surge vessel. This exists to protect any hydrogen vapors that could enter the cooling water circuit if the exchanger were ever to leak since the process side pressure is higher than the cooling water pressure. Vapors would then exit from the top of the surge vessel.

System operation is straightforward. Chilled water flows within a closed loop system leaving the refrigerated chiller outlet at approximately 40°F and entering the cold side of the heat exchanger. Gas from the discharge of the recycle gas compressor flows to the warm (shell) side of the exchanger. Cooling water is warmed to about 55°F and sent to the process surge vessel.

The surge vessel is provided to enable gas separation and venting in case of unexpected gas leaks into the cooling water from the recycle gas side of the heat exchanger. Water from the bottom of the surge enters the circulating pump (spare is provided) suction, which pumps it back to the refrigerated chiller, thus closing the loop.

The typical time to cool the reactor catalyst down from 200 °F to less than 100 °F using the Aggreko solution without sending any gas to the flare is between 12-14 hours. However, Aggreko has built a catalyst cooling correlation model based on the amount of catalyst mass, reactor mass, number of catalyst beds, and other factors that will allow a client to better estimate this time saving. a client more accurately determine the ROI of this approach for their particular plant/unit.

The good news is that the Aggreko phase 2 cool down solution will allow entry to the reactor vessel much quicker. This may permit the plant to move this vessel off the ‘critical path’ and allow the plant the ability to get the units restarted in a shorter time period. The quantifiable benefits of being able to reduce the time to cool down catalyst and gain vessel entry more quickly during a turnaround can vary significantly depending on:

On the high side, if moving the vessel off the critical path allows an entire refinery to be back online 2 days sooner, then a 150,000 BPD per day refinery with a $25 refinery feed marginal value could net $7,500,000 without ever considering the nitrogen and other logistical savings.

However, even if only the unit itself benefits from this change, the savings can still be very significant. For a 30,000 BPD hydrotreater with a $10/bbl marginal value, if the Aggreko solution can shave 2 days off the total turnaround time, the savings would total $600,000.

Even if this approach does not affect the critical path, the refiner will be able to save the cost of the nitrogen and any costs associated with transporting it to the plant site. In addition, there will be no need for all those trucks to enter the facility during a time when there is a high degree of activity within the plant. The fewer people and activities required during a turnaround is always advantageous from a safety standpoint. Another possible tangible benefit is any LPG or other fuel saved that was used to maintain the flare gas within calorific ranges.

Aside from explicit quantifiable benefits, they may be other ways to use the time that is saved that is not easy to quantify. For example, a quicker cool down time may allow a refiner to:

During a turnaround refiners must cool the catalyst in hydrotreaters, hydrocrackers, and reformers from the unit’s normal high operating temperatures to near ambient temperatures in two separate steps. The first step uses the equipment in the unit to cool the catalyst to approximately 200°F. The second step has often used liquid N2, but faces numerous disadvantages.  For this reason, Aggreko’s has developed a patented process that can typically accelerate catalyst cooling from 200°F to under 100°F within 12-24 hours. The process takes recycle gas compressor discharge and cools the stream against a water/glycol solution in a heat exchanger positioned downstream of the recycle gas compressor. The recirculated solution is then cooled in an Aggreko- provided mechanical chiller.  Accelerating catalyst cool down will allow entry to the reactor vessel much quicker, possibly permitting the plant to move this vessel off the ‘critical path’, allowing the plant to restart the units faster. Alternatively, if this unit is not on the critical path, this unique cooling arrangement can still allow the plant to implement a capital project or perform other work on the unit that might not otherwise have been possible.

The technology described in this white paper was developed by the Aggreko’s Process Services (APS) division. APS supports Aggreko’s Refining and Petrochemical division which has provided rental equipment solutions to the industry for over 25 years. APS is the rental equipment industry’s only specialized, rapid response team of elite, licensed process engineers that provide complete, customized packaged engineering solutions for turnaround, emergency, process improvement or debottlenecking purposes, such as temperature control, electric distribution, compressed air, etc. Projects are implemented on very short schedules - days or weeks - and will increase throughput, reduce turnaround times and costs providing benefit to cost ratios of between 5:1-30:1.

Barney Smith is the Turnaround Services Manager for Aggreko. He specializes in working with plants on complex engineered solutions related to process bottlenecks and seasonal cooling limitations. Prior to Aggreko, Barney held several sales and operations management roles in the rental utility industry. Barney has a B.S. in business administration from the University of Louisiana – Lafayette and currently resides in Pearland, Texas with his family.