Market demand for plastics machinery continued to grow in the third quarter of 2014, according to statistics compiled and reported by SPI: the Plastics Industry Trade Association’s Committee on Equipment Statistics (CES).

“The market conditions that drive investment in new industrial equipment have prevailed throughout all of 2014, and I expect these conditions to persist in 2015. These are: low interest rates, and the need for increased productivity in order to meet rising aggregate demand," according to Bill Wood, the plastics market economist who analyzes and reports on the plastics machinery market sector for the CES.

Shipments of primary plastics equipment (injection molding, extrusion and blow molding equipment) for reporting companies totaled $301.4 million in Q3. This is 6 percent higher than the revised shipments total of $284.3 million in Q2 of this year, and is down only 2 percent compared with the robust total from Q3 of 2013. For the year to date, the total value of primary equipment shipments is up 6 percent compared with last year. 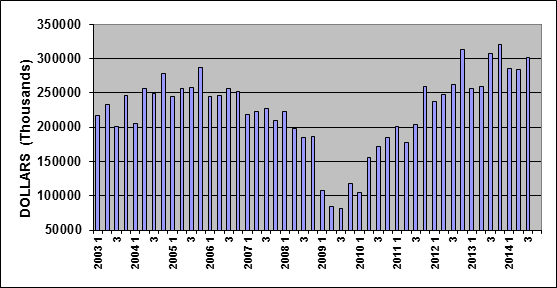 The trend upward in the CES data on plastics machinery shipments corresponds with the trends in the two major data series compiled by the U.S. government that measure activity levels in the industrial machinery sector. According to the Bureau of Economic Analysis, business investment in industrial equipment escalated by 16 percent (seasonally-adjusted, annualized rate) in Q3 when compared with Q3 of 2013, and for the year to date investment is up 13 percent. The other important machinery market indicator, compiled by the Census Bureau, showed that the total value of new orders of industrial machinery jumped 47 percent in Q3 when compared with the total from last year, and for the year to date industrial machinery orders are up a stellar 34 percent.

"From a global perspective, the North American region will be the strongest in terms of total economic activity in the coming months. With the exception of China and India, the economic activity in most of the other major economic regions of the world will see sluggish or even negative growth. But strong demand in the U.S. help to sustain the momentum in the global economy in 2015," said Wood.

The CES also conducts a quarterly survey of plastics machinery suppliers that asks about present market conditions and expectations for the future. The responses from the Q3 survey indicate that machinery suppliers remain optimistic about the market demand for their products in the coming months. When asked about expectations for future market conditions, 95 percent of the respondents expect conditions to stay the same or even improve in the coming quarter, and 98 percent expect them to hold steady or get better during the next 12 months.

There is a strong consensus that North America is the global region where the most promising market conditions are expected in the coming year. Expectations for Mexico improved substantially when compared with the responses from last quarter. Expectations for Latin America, Asia, and Europe were lowered. As for the major end-markets, the respondents to the Q3 survey expect that automotive and medical will remain strong in terms of demand for plastics products and equipment. Expectations for packaging, appliances, and construction improved when compared with the previous quarter. 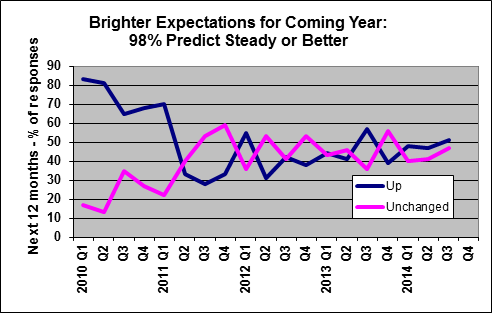 The industry and survey analysis that appears in this report was contributed by Mountaintop Economics & Research, Inc. (MER), a supplier of market analyses and forecasts for decision makers in the plastics Industry. MER founder Bill Wood is a plastics market economist with more than 25 years of experience in industrial market analysis and forecasting. (billwood@plasticseconomics.com)

The SPI Committee on Equipment Statistics (CES) collects monthly orders and shipments data from manufacturers of plastic injection molding, extrusion, blow molding, thermoforming, hot runners and auxiliary equipment. A confidential, third-party fiduciary, VERIS Consulting, LLC (VERIS), compiles the monthly data and analyzes individual company data for consistency and accuracy. Once this crucial process is completed, VERIS aggregates and disseminates reports to participating companies. If this is something you and your company are interested in please contact Katie Masterson at 202-974-5296.