Schoeneck Containers, Inc. (SCI) is a company that thinks a lot about its future – and how to continue to maintain a long track record of profitability and reliability while meeting a growing demand for its quality plastic containers for customers throughout North America.

It’s the kind of thinking driving the decision to install a closed-loop adiabatic fluid cooler and central chiller with free-cooling capabilities at the company’s new 250,000-square-foot production facility in Delavan, Wisconsin.

With the advanced hybrid cooling system in place, SCI stands to reduce energy costs for cooling at the facility by nearly 50% per year when compared with cooling technologies without free-cooling capabilities. And, said SCI Facilities Engineering Manager Bill Bushman, the company’s approach to process cooling lets it do what it does best: delivering customer satisfaction and maintaining strong growth.

“This system lets us focus less on the cooling and more on the equipment and process of manufacturing quality containers since we know we’ve got a robust system that just runs without taking a whole lot of effort to oversee it.” 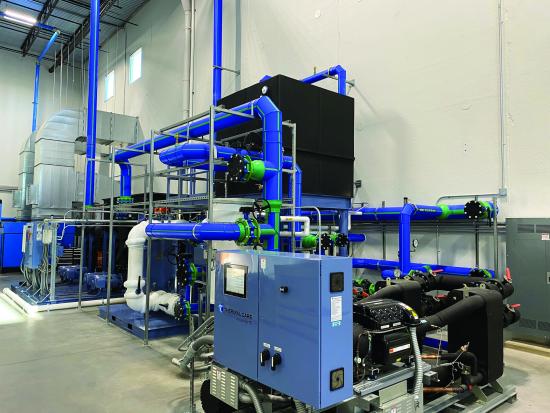 SCI supplies plastic containers for diverse consumer and commercial markets. Since its inception in 1972, it has experienced steady growth as a supplier of containers for food, beverage, personal care, household, industrial,  nutraceutical , wipes and pet care products. The company employs 170 people.

For decades, SCI produced containers at its 172,00-square-foot headquarters facility in the Milwaukee suburb of New Berlin, Wisconsin. To do so, it regularly updated its headquarters operation and added production lines to meet demand. Eventually, growth led to the construction of its new facility in nearby Delavan, which began operation in 2019.

Bushman said SCI built the new facility with plenty of room for growth since the outlook for the company has never been better, which is due to a skilled and talented workforce and a philosophy of meeting customers where they need to be met.

“Our claim to fame is our willingness to be flexible with our customers in terms of the types of packaging configurations they’re looking for in plastic containers,” Bushman said. “We don’t just deliver full-size palletized skids. Instead, we handle special orders, work with smaller companies and we’re flexible as far as how and what we can deliver.”

After reviewing process cooling options for the Delavan facility, SCI decided to work closely with Thermal Care to install a hybrid system combining a closed-loop adiabatic fluid cooler with a water-cooled chiller to meet the operation’s cooling needs – and its strategic goals. Based in Niles, Illinois, Thermal Care (www.thermalcare.com) is a leading manufacturer of water chillers, process cooling equipment and systems for applications worldwide.

The ability to reduce energy savings costs was a primary factor in choosing a hybrid cooling system, Bushman said.

“The energy savings and return on investment it offers was a main driving force, especially since we knew we could remove energy costs for a good portion of the year,” he said, adding that reliability also played a key role in the decision given the importance of process cooling. “Process cooling really defines the plastics process. Once you’ve got a stable and consistent cooling system you can keep a tight rein on process control and increase cycle times, product quality and overall profitability.”

The company also headed into the planning and design of the process cooling system with a clear vision for adding additional cooling capacity to meet increased production.

“Even though we started with one machine at the new facility, we added another machine every six to nine months and that’s pretty much the timeline going forward,” Bushman said.

Installed at the new facility in 2018, the cooling system capitalizes on free-cooling capability and the use of a water-cooled chiller with Variable Speed Drive (VSD) technology to save energy. The closed-loop adiabatic fluid cooler, which is designed to fit in a small footprint, also saves water and water treatment costs versus a traditional open cooling tower since it only uses a small amount of water in the evaporation process to generate chilled water.

The facility’s cooling system consists of a HFCG 250-ton, closed-loop adiabatic fluid cooler located outside the new facility and a TCW700 250-ton water-cooled central chiller inside the facility. It also includes adiabatic fluid cooler and chiller pump tanks as well as a free-cooling heat exchanger, and Aquatherm Polypropylene (PP-R) piping. The system is designed to provide chilled water to the processes at 55oF (12.8oC). In the meantime, SCI uses two temperature control units to more precisely control chilled water temperatures delivered to the injection molding machines. 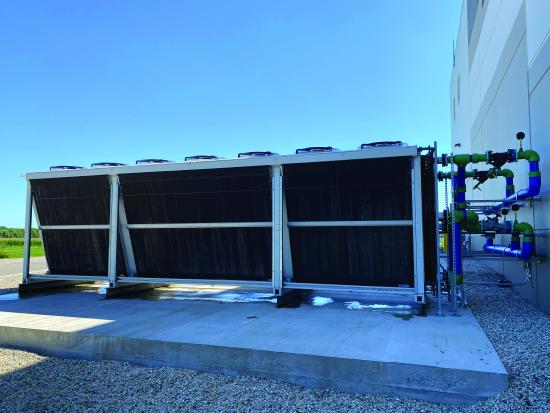 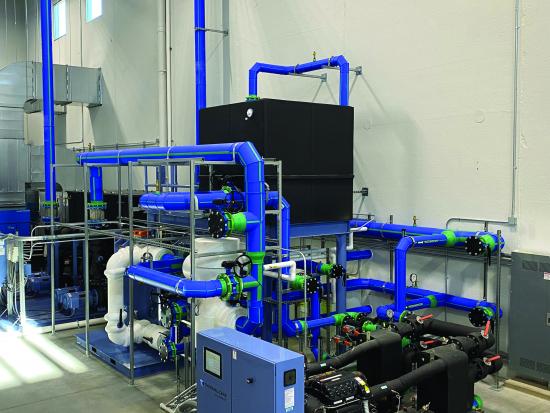 Free-cooling takes place when ambient temperatures are consistently below 50oF (10oC), which is typically from fall through spring in Southeastern Wisconsin. When operating in free-cooling mode, the system automatically shuts down the chiller since the adiabatic fluid cooler can efficiently cool process water and supply all the chilled water needed. Doing so saves energy and cost since cooling is provided without the need to operate the chiller’s refrigeration compressor, which is typically the most significant consumer of power in any process cooling system.

For additional energy savings, the chiller is engineered with a VSD centrifugal refrigeration compressor to efficiently operate at part load as dictated by the cooling load. The entire system is also automatically set to shift to free-cooling based on one-degree increments in order to gradually reduce the load on the chiller when ambient conditions approach the 50oF setpoint.

While energy savings are a top priority, a hybrid cooling system also allows SCI to avoid issues encountered with the process cooling system and free cooling at the headquarters plant in New Berlin during winter months. Additionally, it helps reduce water consumption and water treatment costs at the new plant.

The headquarters process cooling system consists of two open cooling towers and two water-cooled chillers and is configured to allow for free cooling. The system helps SCI achieve energy efficiencies, yet at the same time, opportunities for savings are curtailed due to problems with ice buildup during the winter.

“With a typical Wisconsin winter you can have temperatures that are minus 10oF (minus 23.33oC) or minus 20oF (minus 28.29oC),” Bushman said. “That has caused problems with ice buildup and things like that from time to time with our system at that operation, which prevented us from using free cooling as much as we wanted. But we were able to get away from that problem with a closed-loop system at our new facility since it operates in dry mode in winter.”

Bushman said he also appreciates how the closed-loop system allows the new plant to  minimize water consumption and keep a lid on water treatment costs since there is no need to replace or treat large quantities of evaporated process water.

“We don’t go through a lot of water like we do with the open cooling towers at our New Berlin facility,” he said. “We also don’t have to spend a lot of money on water treatment; the cost for treatment at the new facility is less than a quarter of what we pay at our New Berlin plant.”

The monitoring and measuring capabilities of the integrated PLC control system are yet another advantage of the hybrid system, especially given the importance of plant uptime, Bushman said.

“Since it’s an automated system we don’t need to pay a lot of attention to it. And it provides remote access so Thermal Care can dial it up and see how efficiently we’re running at any time and do troubleshooting if it’s needed. Given the scheduling demands we have and the cost for downtime, it just make sense.” 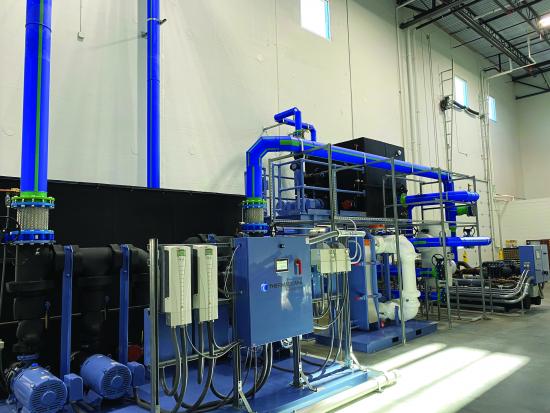 For SCI, 2019 marked the first full year of operation for the hybrid cooling system. As planned, the bustling operation was able to supply its injection molding and blow molding machines with ample cooling, while also saving on energy.

“We’re planning to look at the data closely in the next six months after we add another production line to the facility, but we know we benefited since we were able to use free cooling from November 2019 through March of 2020,” Bushman said. “We’re happy with the return on investment. And because of what we learned by implementing this type of system in Delavan, we’re looking at upgrading our New Berlin facility in the next couple of years with some of the same technology.”

In the meantime, Bushman said the hybrid system at the new plant is well prepared for steady growth in keeping with SCI’s business forecast. Toward that end, the system was designed so the company only needs to add an adiabatic fluid cooler, heat exchanger and pump to double the cooling capacity of the existing system.

“We have enough room in the facility for a total of 12 to 14 injection molding and eight blow molding lines. We had to be forward thinking in how we approached this and how we set up space for future equipment. We just had a management meeting where we discussed plenty of opportunities. Things are looking good.”