Chillers are an essential component in many building Heating, Ventilation and Air Conditioning (HVAC) systems. They provide cooling to the building by working in tandem with pumps and cooling towers in a water-cooled chiller plant. Because of the chiller’s complexity and its role in cooling facilities, it is arguably the most important piece of equipment to maintain.

Chillers are big energy users and are often not running at peak efficiency. Missed chiller energy savings opportunities can be as high as 40% and typically range between 10 to 20 percent. The U.S. Department of Energy (DOE) also estimates chillers consume more than 50% of a building’s electric energy use during seasonal periods. Unfortunately, the DOE also estimates chillers are wasting up to 30% of their energy use because of inefficiencies.

This article examines often overlooked or undiscovered energy waste with water-cooled chillers and the benefits of chiller monitoring and data analytics.

Energy (and money) is often wasted due to chiller inefficiency and underlying operational problems. There seems to be a general thinking that if a chiller is delivering chilled water at its setpoint, everything is fine and annual maintenance takes care of the rest. This thought process can lead to problems since annual maintenance is generally scheduled when the chilled water plant is not running anywhere near maximum capacity. This means issues can go unseen by the service technician. Frequently, issues remain hidden until chillers operate near their design capacity.

In many instances a chiller has poor operating efficiency – or worse – the chiller’s capacity is reduced. Reduced capacity doesn’t show itself until the plant can’t deliver on the hottest week of the year and chillers can fail at that time because they are pushed to or beyond their design limits. With such a critical piece of equipment, it’s better to know there is a:

When we initially hook up chiller plants to a monitoring and analytics solution, we commonly find efficiency losses from 10 to 20 percent, and sometimes up to 40% on about half of the chillers we evaluate. It’s not that service contractors are doing something wrong; they just don’t have all the information served up in a way to help pinpoint problems. Service technicians know more about their machines than anyone. They just don’t have the same tools and are not specifically looking for energy waste and underlying problems.

The value of a monitoring and analytics solution will depend on the quality of the analytics and ultimately who is evaluating the data and delivering findings. All solutions we are familiar with collect data locally at the chiller and then send it to the cloud for analytics. Some good rules of thumb to follow to ensure the system is operating efficiently, include:

When vetting solutions, it’s essential to gauge the level of diagnostics needed to find out what is happening with your chiller. A detailed monitoring and analytics solution provides the full picture of what is happening with any given chiller. Hardware and cloud-hosted software solutions for data refrigeration analytics, such as ClimaCheck (www.climacheck.com), can provide insight to help optimize water-cooled chillers.

A thorough monitoring and analytics solution typically incorporates existing data points from the existing chiller, such as water entering/leaving temperatures, and condenser/evaporator saturation temperatures and pressures, along with a few external temperature and pressure sensors to complete the data collection package.

Having as much data available as possible from the chiller does three things. First, it keeps installation cost down because many of the sensor readings are available from the chiller BACnet cards. Secondly, by collecting data directly from the chiller, the quality of these explicit data points can’t come into question during investigative troubleshooting with the chiller technician. Finally, only one set of sensors must be maintained.

With any monitoring and analytics solution, proper commissioning is critical to obtain reliable results. It’s also vital for a person knowledgeable about chillers and the refrigeration cycle to review the data in order to unlock the power of the analytics. It’s best to perform ongoing data reviews on a monthly basis.

It’s also important to realize there can be resistance or pushback about the findings of data reviews, which is natural since chiller performance monitoring is not yet common and it’s natural to be skeptical of something new. It may even go as deep as questioning the validity of the data.

The key to success with monitoring and analytics is teamwork. This means bringing the monitoring engineering team’s diagnostics and the mechanical service contractor onsite together to work through complicated performance issues.

It may also be necessary to strip away analytics and get to the basics of the refrigeration cycle: Discharge superheat, sub-cool, power input and refrigerant/water approach temperatures. When you have the benefit of two identical chillers, get them loaded evenly so a comparison of two machines can occur. Trust your data and keep digging. Chiller diagnostics are critical for knowing there is a problem, but when the problem is more obscure, we must look beyond the tool and get to a common ground.

Monitoring and Data Analytics at Work

What follows are case studies at three different facilities to illustrate how a detailed monitoring and analytics solution pinpointed issues that might’ve gone unnoticed with water-cooled chillers. While the case studies don’t paint a complete picture of the typical findings and how all of the issues were resolved, they illustrate the value of continuously monitoring to identify issues that can prevent a critical failure from occurring and from energy waste going unchecked. All three examples share common themes in that:

The facility historically had problems with the performance of one of its two chillers. While looking at the analytics data, the engineering team observed a 40% difference in operation in terms of power and efficiency for the identical chillers. The data pointed to something wrong with Chiller No. 2, including higher power draw, very high discharge superheat and low refrigeration compressor efficiency.

In follow-up discussions, plant operators said they observed differences in these two chillers and opted to only operate the questionable chiller if necessary. Additionally, the chiller service provider investigated the concerns and concluded the issue was caused by different flow rates through the chillers.

Data analytics helped to more clearly identify the problem, while also moving toward a resolution. In this complicated example, it took the monitoring engineering team and chiller service technicians working together to identify the root cause of poor compressor performance – an improperly installed VGD.  As a result, the VGD was adding pressure drop at the outlet of the refrigeration compressor. The chiller had been running this way for five years and without analytics all that existed was a hunch from operators that something was wrong. Fortunately, data analytics provided enough information to confidently move beyond a conversation and accurately pinpointed the problem. 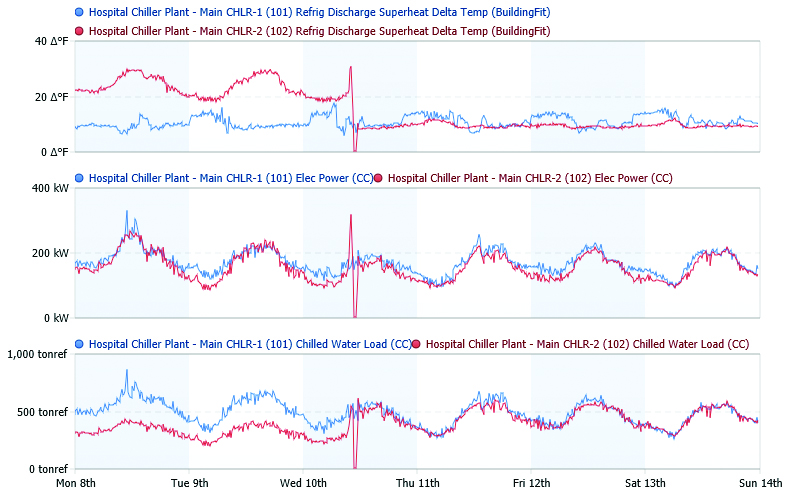 A monitoring and analytics solution was used on six of the facility’s chillers. When comparing two identical chillers, the team saw a clear difference in performance between Chiller No. 5 and Chiller No. 6. During a short-term test, it was clear Chiller No. 6 operated 20% less efficiently than Chiller No. 5. Again, the solution involved the data monitoring engineer working onsite with the contracted chiller service technician to find the root cause which ended up being bad chiller trigger control board. Shortly after testing and before the facility could investigate the findings, Chiller No. 6 experienced a VFD-single phase failure. The chiller manufacturer subsequently replaced the malfunctioning trigger board. With the repair all problems were resolved, allowing Chiller No. 6 to operate at the same level of efficiency as chiller No. 5.

Figure 2: Shown are Chillers No. 5 (blue line) and No. 6 (red line) operating at the same level of efficiency before a trigger board malfunctioned on Chiller No. 6 on Friday and how a repair on the same chiller on Sunday corrected the issue.

A routine review of data revealed a problem with low-refrigerant charge, which is a common issue in water-cooled chillers and especially with high-pressure chillers.

Data obtained on one of several chillers indicated there was a significantly degraded evaporator approach temperature over several months. The chiller indicated poor approach in January but since the chiller was operating at low load (less than 50%) and relatively close to the other chillers in the plant, it was not an urgent concern. There were signs something might be wrong since evaporator approach was above the “rule of thumb” of 2 °F. However, part load on the chiller made it difficult to call out a refrigerant charge issue at that time.

When the chiller next operated in April, the evaporator approach jumped from 2.5 °F (1.4 °C) and was consistently above 8 °F (4.4 °C). Additionally, it’s operating efficiency was 10 to 15 percent worse (kW/ton) than the other chillers. The chiller illustrated consistently poor performance at all load conditions with the evaporator approach well beyond the acceptable range for this type of chiller.

After the problem was identified, the contracted chiller technician repaired the chiller and filled the refrigerant to design specification. Chiller performance increased significantly post-refrigerant charge. At about 300 tons, efficiency improved from 0.5 kW/ton to 0.4 kW/ton for an improvement of approximately 20%.

Chillers are the largest energy user in the heating and cooling system and many of them waste a considerable amount of energy, i.e., dollars. It’s even more of a reason for having detailed chiller monitoring and analytics solutions in place.

Kevin Quapp, PE, is ETC Group Director of Engineering. He has 21 years of experience including eleven as an energy efficiency specialist at ETC Group. Quapp earned a Bachelor of Science in Mechanical Engineering from the University of Idaho.

Gregory Jimmie is a project engineer with expertise in chiller and chiller plant optimization. He also focuses on using analytics to identify energy efficiency opportunities. Jimmie earned a Bachelor of Science in Mechanical Engineering from the University of California, San Diego.

ETC Group is a leader in energy efficiency, commissioning and an engineering firm that provides services to reduce building energy waste, reduce operational costs, and creates healthy and comfortable environments to patients and tenants. The company’s people are experienced, trusted and proven. The company prides itself on being an industry innovator in its approach to problem-solving, and implementation of leading-edge data analytics technologies. For more information, visit https://etcgrp.com/.

All charts courtesy of ETC Group.