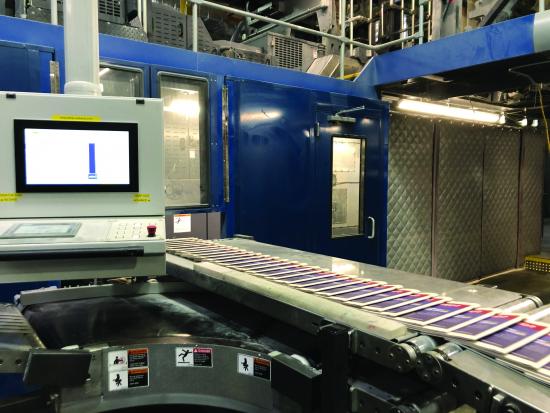 For the Production Support team at the expansive Quad printing plant in Sussex, Wis., there isn’t one way to manage the operation’s complex and elaborate process cooling system. Rather, the formula for success involves a three-pronged approach that includes carefully measuring and monitoring system performance, diligently and proactively maintaining equipment to ensure peak efficiencies, and investing in updated equipment based on sound decision making.

All the while, said Quad Production Support-Regional Manager Joe Valoe, the team always keeps its eye on the prize.

“It’s all about the quality of the print product. In order to do that, we have to supply our press network with cool water at the proper temperature for setting the ink,” Valoe said. “Not only that, but the presses don’t run if there’s no cooling water; cooling is as important as the press itself.” 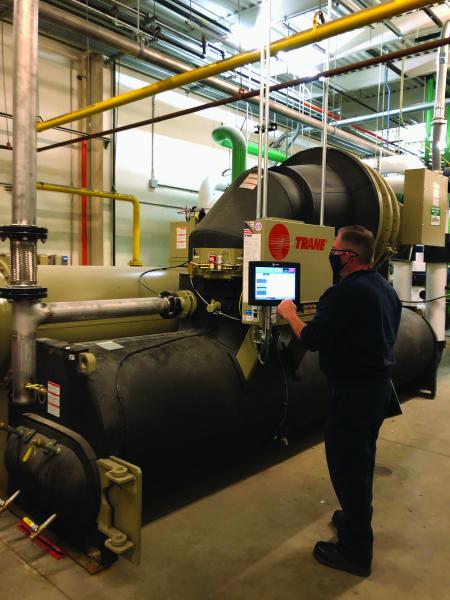 Quad Production Support-Regional Manager Joe Valoe checks a control panel on one of seven chillers at the 1.7 million-square-foot Quad plant in Sussex, Wis.

The company, founded in 1971, gained widespread recognition early on as one of the printing industry’s foremost innovators and grew to become an industry leader with a A-list client base including some of most well-known media brands in the world. The company continues to print magazines (such as Chiller and Cooling Best Practices Magazine), along with other types of commercial solutions, and today leverages its data-driven print expertise as part of an integrated marketing platform that helps clients not only plan and produce marketing programs but also deploy, manage and measure them across all traditional and digital channels.

Like the company itself, the cooling system at the plant has evolved over time. Today, the system is constantly evaluated and re-evaluated to determine how best to support the printing operation – and do so cost-effectively.

The system’s main function is to deliver cooling water to presses where it’s circulated through chill rolls for “setting ink” on paper in the printing process. In addition, oils, ink solutions and electrical components are also cooled. After water circulates through the press’s cooling loops it returns to the evaporator side of a given chiller, giving up its heat load to the chiller’s refrigerant. The heat load is then transferred to the condenser side of the chiller and onward to the cooling towers and out to the atmosphere. 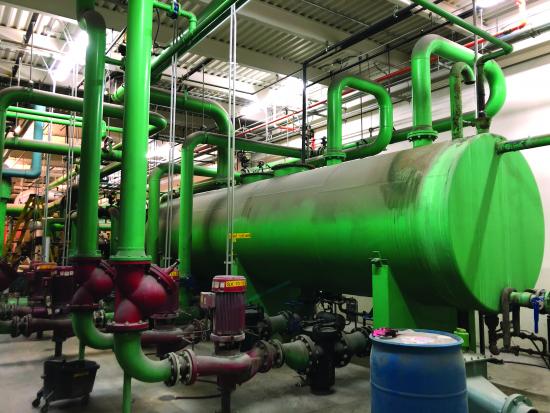 The building featuring the plant’s main press operation features several high-tech web offset presses. Normally, one to two cooling towers and one to two chillers  are used to meet the press operation’s cooling load, which varies from 350 to 1,000 tons. For the other building, one tower and one chiller is normally used to satisfy the 100-400 ton cooling load.

Printing press operators monitor and carefully control the temperature of cooling water for the press’s chill rolls in both these buildings. The goal, said Valoe, is to keep the cooling water temperature between 60°F (15.5°C) and 70°F (21°C) to achieve the desired print quality on each press.

“The system is designed to support the press operations with a stable, steady-state volume of chilled water at a fairly constant temperature. Once ink is on the paper, it’s run through a ‘dryer’ to drive off solvents in the ink. At that point, the ink is sticky and the chill rolls are used to set the ink. If the chill roll temperature is off by the slightest degree it affects the print quality and production, which is why the ability to maintain a stable and consistent cooling water temperature is critical,” Valoe said.

Equally critical is the reliability of the system. As such, the operation’s separate cooling systems are connected via a 10-inch diameter pipe. If one system needs to be shut down for any reason, such as an equipment upgrade, the plant can open the appropriate valving and activate the offline system and use it to supply cooling water to both press operations.

“We recently shut down one portion of our larger building’s system to install a new centrifugal chiller, so we brought in cooling water from the other building to make sure we had enough capacity to keep the other pressroom satisfied,” Valoe said.

Ensuring reliability of the entire system at the plant is a priority because some components are well into their useful life. Valoe said the need for rigorous maintenance is paramount as part of the plant’s continuous improvement process.

A key strategy involves the use of the plant’s master control system to regularly monitor its performance and make improvements as needed. As an example, in 2020 the team spotted higher-than-normal condenser approach temperatures to the chillers. Since the temperatures increased beyond the desired setpoint, the team took action.

“Approach temperatures on chillers is a measurement of how good the heat exchangers are between the surfaces of the chillers’ condenser and evaporator tubes,” Valoe said, adding that an increase is unacceptable since it adversely affects chiller efficiency. The team subsequently commissioned Butters-Fetting Co., Inc., to thoroughly clean the evaporate and condenser tubes of every chiller. Butters-Fetting, a local mechanical contractor, also performs annual routine chiller maintenance at the plant.

Quad electrician/programmers also created an alarm to email the Production Support team when chiller condenser supply/return water temperature differential is greater than 10°F (-12°C) for more than 10 minutes. This simple change in the program on the master control system saves the chillers from dropping out due to no flow, or elevated condenser water temperature. 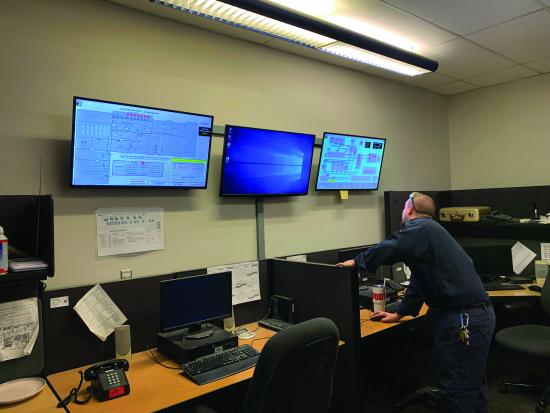 Mitch Koenigs of Quad monitors the Sussex plant’s cooling system. As part of its continuous improvement process, the plant is working to improve on how it controls the system for further optimization.

Another example of the value of monitoring with smart controls and maintenance is water treatment. The team actively monitors water treatment and contracts with local consulting firm Water Consultants of America to help maintain the proper chemistry of cooling water in the closed loop system and towers. Valoe said the consulting firm plays an important role in helping it maintain water chemistry and the manage the use of chemicals.

“We’re looking at amps on all the chiller so we can determine the power draw,” he said. “Our benchmark is one kilowatt per ton or less and we’ve been able to keep it there for the most part, depending on how the other equipment on the entire system is running.”

Measuring and monitoring system performance and a diligent maintenance program represents  two thirds of the formula for system efficiencies at the plant. The remainder involves changes in how the system is controlled, as well as investing in equipment upgrades.

The plant’s master control system consists of a Texas Instruments program interfaced with Wonderware graphics package. The system provides the team with the metrics needed to ensure efficiencies and determine where changes are needed. In addition, the plant uses its own maintenance control algorithm for monitoring equipment and signaling the need for maintenance. The key, said Valoe, is to continually improve it.

“The control system is fairly robust and it works well,” Valoe said. “We’re now in the process of learning how to better program and streamline it as part of our continuous improvement process to further optimize the cooling system.”

Continuous improvement also involves the replacement of older cooling system components. For the larger pressroom, the plant replaced an aging chiller in 2020 with a 400-ton Trane centrifugal chiller. Additionally, plans are underway to replace one of the cooling towers on main press operation building with a new, stainless steel unit to improve efficiencies and alleviate any potential problems with rust. In 2019, the company replaced an aging tower servicing the other building with a new tower.

“That’s all part of the review process we’ve undertaken,” Valoe said. “It’s like, ‘Okay. How do we make sure we have a steady state of chilled water with equipment?’ One of them is looking at new cooling towers.”

Additional strategies involve an evaluation of initiatives once used to reduce the amount of energy required for cooling. It reinforces the goal of determining how to provide cooling for the plant as cost-effectively as possible.

One such initiative under review, as an example, involves a 430,000-gallon underground water tank in the building with smaller press operations that serves as a backup supply of water should city water be unavailable in the event of a fire. At one time, the plant chilled the water in the tank at night using a dedicated chiller. It then shut down a chiller and used the stored chilled water for cooling during peak utility hours, saving on electrical costs. The plant shelved the strategy years ago as production shifted over time, but the concept is back on the table since all ideas are welcome.

“We want to make sure that as a company we’re making good decisions when it comes to the best use of existing equipment and how we wisely invest capital. Our goal is to be the lowest-cost provider of high quality services. Having a well-tuned cooling system helps us achieve that goal,” Valoe said.