Smardt’s 120,000 sq ft facility in Montreal houses the Group’s global headquarters as well as the production base for North American and 60 Hz oil-free centrifugal chiller production. Production operations are closely integrated with those at Smardt’s Plattsburgh, New York facility two hours away by road.

Good morning! Can you describe your global manufacturing operations?

Good morning. The Smardt Chiller Group has manufacturing operations in North America, Asia Pacific, China and Europe.  Our main North American plant and headquarters is in Dorval (Quebec) complemented by our Plattsburgh (New York) plant which serves government and other clients requiring a “Made in the U.S.A.” certificate.  Asia Pacific manufacturing is done in Melbourne (Australia) and we have launched a manufacturing plant in Guangzhou to serve China. The European market is served out of our plant in Stuttgart (Germany).  North America and Asia Pacific make up 80% of our business with the balance coming from Europe and China –which are our fastest-growing geographies.

I detect an Australian accent. How did Smardt headquarters end up in Quebec?

My ex-partner Ron Conry and I started Turbocor in Australia in 1992, and took this breakthrough technology through five prototype generations before working out that we needed to be based in the largest chiller market in the world – in those days, North America. After finally recruiting the necessary development capital, we brought 20 Australian engineers, their families,  dogs, cats and one parrot to Quebec in 2000. Everybody fared wonderfully with Quebec’s snow and learning French – except for the parrot who rumor has it didn’t take to the new language too well!  . We launched Turbocor technology in 2003 at AHR Expo in Chicago, then at Mostra Convegno in Milan. Takeoff in this very conservative industry was slow, so after a worldwide search we formed a joint venture with Danfoss in 2004.  In 2013 Turbocor became wholly-owned by Danfoss. 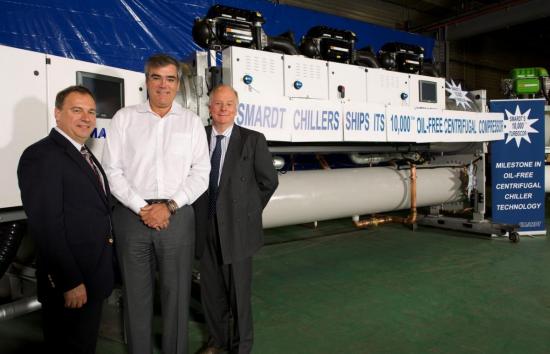 Smardt is all about oil-free centrifugal technology, why?

Yes we are and it’s a long story! I was running the Multistack chiller company, in 1992, when we lost a huge Singapore hotel job because we couldn’t find a refrigeration compressor, anywhere in the world, able to solve the problem with the miscibility of ester lubricants with what was then the new refrigerant R-134a.

Because of this, my technical partner Ron Conry, began work in 1992 to come up with a solution to simply leave lubricants out of the equation. After three generations of Australian government grants and five generations of prototypes, we ended up with the new Turbocor oil-free centrifugal  technology! Revolutionary not only in its part-load energy efficiency but also in the lifetime reliability advantage of needing no oil return.

It’s the long installed chiller history since then which gives me and gives Smardt the confidence to say, if you can live without oil, you should, due to the enormous benefits.  The benefits include significant improvements in reliability and reductions in maintenance costs. If you can halve maintenance costs over the 25 year life of the chiller those are big savings.  Oil-free means no need to check or change oil, no need for crankcase heaters, no purge systems. Some 70%  of reliability issues, with refrigeration compressors, are related to oil-return. Maintenance needs and costs with oil-free centrifugal are cut in half compared with a lubricated chiller. If you are an owner and can complement these reliability gains with significant energy savings, then you are laughing.

How are energy-costs reduced by the oil-free high-speed magnetic bearing technology?

On now, to your question relative to magnetic bearings. Back in 1992, we looked at gas bearings, air bearings and magnetic bearings. The most difficult challenge with magnetic bearings relate to digital control challenges. We spent a lot of money and time (and made some mistakes) working through that. Due to the tonnages required in HVAC, magnetic bearings work better due to the laws of physics. Once you’ve sorted out the control issues (five of the nineteen Turbocor patent families are dedicated to controls) and figured out bearings and shaft design, you’ve got a durable system that works!

Electronics are more complicated than in an orthodox lubricated centrifugal compressor. Our advanced electronics automatically measure and adjust the shaft position 120 times per revolution. At a maximum operating speed of 48,000 rpm, this equals six million adjustments per minute!

Smardt today is the top  global supplier of oil-free centrifugal chillers and in early 2015 we celebrated our 10,000th installed compressor. Each chiller has not only delivered energy-savings, but beginning even with our early prototypes, has been remarkably reliable due to the simplicity of the design. If you have a simple, elegant and robust oil-free design – and you don’t have to worry about oil-return,  building owners end up with the lowest life cycle cost in the industry.

Early in 2015, Smardt shipped its 10,000th Turbocor compressor in an oil-free centrifugal Smardt chiller, confirming its leadership of the global oil-free centrifugal chiller category. Smardt is Danfoss Turbocor’s largest customer worldwide and  now has over 5000 chillers installed across the globe. Turbocor was founded in 1993 by Smardt CEO Roger Richmond-Smith and his then-partner Ron Conry. Its acquisition by Danfoss was completed in 2013.

Are most chiller installations using fixed-speed controls? Is demand growing for variable speed?

Absolutely. People are beginning to understand that the vast majority of industrial and HVAC installations are part-load applications. It’s not just due to climatic variations and comfort cooling, it’s changes in process demands as well.

AHRI estimates that there’s a very large population of over 30,000 installed chillers aged 25 + years old of over 400 tons in North America. These are most certainly not using VSD’s and represent a major energy retrofit market opportunity.

When looking at energy retrofits, lighting tends to come first followed by HVAC. Some of our Reps have seen that putting the work into energy retrofits pays dividends. You have to qualify your customer, find the right people, speak the right language and talk about a life-cycle perspective rather than a lowest first cost.

There are convergences of interests occurring in the manufacturing plants which nobody is doing anything about. It’s encouraging to hear some people have worked out that cooling, compressed air, lighting, combined heat & power are all the same side of the coin. Energy management and energy cost management require a long perspective rather than a quick fix.  Vertical Systems, in Los Angeles, is a Rep of ours who is very active in the energy retrofit market.

What are your main market segments in Europe?

In Germany and Northern Europe, where comfort cooling  often means opening a window, we are very involved with process cooling. Over half our business in Europe comes from process cooling in the manufacturing environment. These manufacturing segments value oil-free and energy-efficient technology. They include the food and beverage, electronics, chemical, pharmaceutical and automotive segments.

The segments we serve drive are influenced by our strong presence in Germany.   Our German We have an operation in Germany, which was an acquisition in 2011. It has doubled in size since then and moved to our new facility in Wendlingen (near Stuttgart) in 2013. It has two divisions. One division is custom-built systems madefor German companies globally. The German companies often form a view on process cooling which is an extension of their engineering department. They needwant consistent training and support. and cooling philosophies. We work with our German key accounts plants in China andin other countries all over the world.

The second division supplies our standard oil-free centrifugal chillers through distributors all over Europe and the Middle East.

What are your main market segments in North America?

In the U.S., our largest customer segment (and fastest growing) is data centers, whether using evaporative-cooled chiller plants in warm areas to free-cooling installations in northern markets.  Anyone speaking on the phone has a direct relationship with a datacenter – whose major challenge is cooling.

The next  key segments are healthcare, government, hotels (hospitality industry), institutions (schools, universities and colleges), and office buildings.   Energy retrofits are important as are district-cooling solutions for university campuses covering halls of residence, laboratories, stadiums and lecture theaters. They are big energy consumers who value our engineered solutions.

Water moving slowly through the external medium lowers the temperature of the incident air on the condenser coil so that these Smardt oil-free centrifugal chiller energy efficiency levels rival those of a water cooled system while entirely removing any risk of legionella. Little wonder that hospital campuses in warmer/drier climates have been major early adopters of this adiabatic range.

Healthcare is pretty important as well.  Current hospital engineers certainly understand the need to manage partial loads and the benefits of oil-free technology. But they are often faced with older equipment installed years ago when  the system design tendency was to oversize chillers by 20 percent -condemning them to run inefficiently throughout their working lives..

The healthcare sector prizes flexibility.  Flexibility means the ability to re-configure chiller plants within the 25 year life of a water-cooled chiller – due to changing situations at the healthcare campus. They deal with not only operating rooms, specialist suites and neo-natal care units, but they have a large range of conditions they want to have design flexibility on. 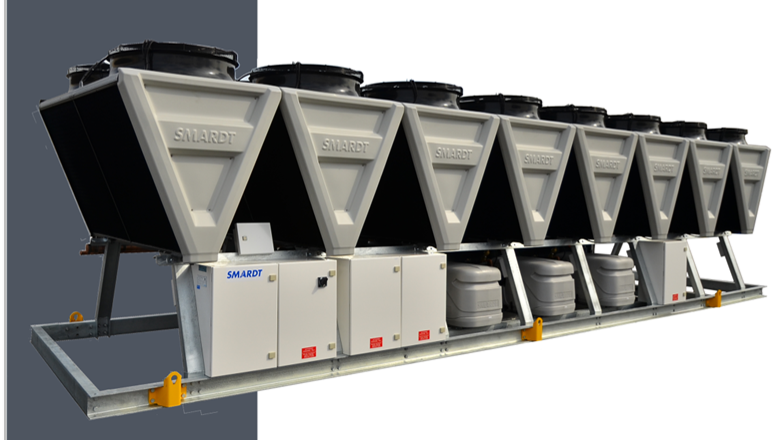 Smardt’s air cooled range 60TR to 600 TR can be specified in single large machines or in modular configurations. It can also be specified with a range of different low-GWP refrigerants; with free cooling; or even with a solar boosting, enabling a fast-payback hybrid-powered chiller whose value does not depend on utility incentives.

The Smardt split design and our modular range are all about flexibility in solving  difficulties of access. There are installations where it’s impossible to get a 2500 double-barrel machine into a passenger lift and then down 8 stories. Modular chillers do cost more but the very large savings on access can often justify them. 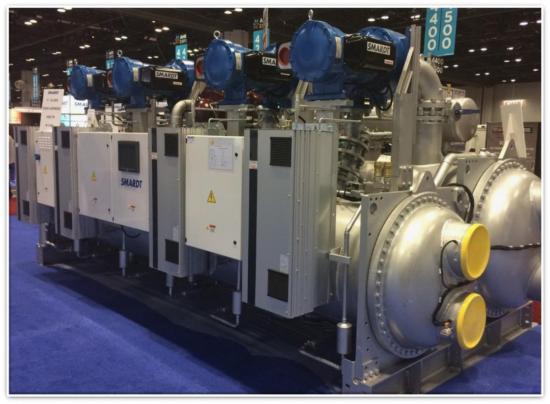 Smardt’s large water cooled oil-free centrifugal chiller range is crowned by its 2500 TR “Pony Express”, where a combination of 350 TR compressors with one 200 TR compressor echoes the orthodox chiller plant room, but actually incorporates the orthodox low-load or “pony” chiller function into the main chiller. The range offers superb redundancy and the very unusual ability to operate safely and efficiently at 2% capacity or 50 TR.

Thank you for your insights and your time.