The 2019 AEE World Energy Conference and Expo was held September 25-27 at the Walter E. Washington Convention Center in Washington D.C. The event featured 14+ tracks, 56 sessions, over 260 individual speakers, and 62 exhibitors.  Both Chiller & Cooling Best Practices and Compressed Air Best Practices® Magazines were pleased to be in the literature bins at the 2019 AEE World!

My first stop at the Expo was the Smardt booth. Smardt, a well-known leader in the industry is proud to have been making oil-free centrifugal chillers since 2002. On display at the booth was the 115TR air-cooled Smardt chiller with a free cooling package, able to achieve 100% free cooling capacity at 534 GPM, 84/66 and ambient air temperature from 52.5 °F to 37.5 °F. Adding a Smardt free cooling package can drive air-cooled chiller efficiencies to spectacular levels with appropriately low ambient temperatures. Group Marketing Manager, Cam Whitelaw, spoke with me about the innovative free cooling package at length. Cam shared with me that, “In free cooling mode, only the chiller’s condenser fans operate, reaching an unprecedented efficiency as high as .10 kW/TR.” 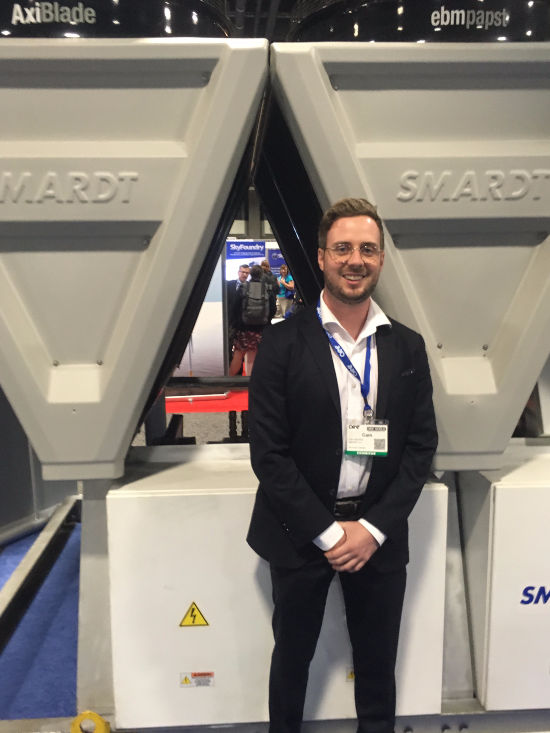 Another booth I visited was Multistack Chillers, where I met up with Regional Sales Manager, Mike Clatworthy. On display at the booth was Multistack’s Dedicated Heat Recovery Chiller (DHRC). According to Mike, “The heat recovery concept has been around since the 1970’s but was difficult to implement early on. Now, thanks to the modular nature of the DHRC, the implementation of heat recovery is simple because it allows users to control both the flow of hot and cold water simultaneously.” The modular scroll nature of the Multistack DHRC chiller transforms the application of heat recovery from difficult to simple because it provides simultaneous control of hot and cold water. Most buildings have a constant heating and cooling requirement. By identifying the maximum and minimum heating and cooling loads it is easy for customers to size a DHRC from 10 to 900 tons capacity per array. This allows the DHRC to become an integral part of a building’s chiller and boiler systems since the DHRC can produce water at up to 180 °F. 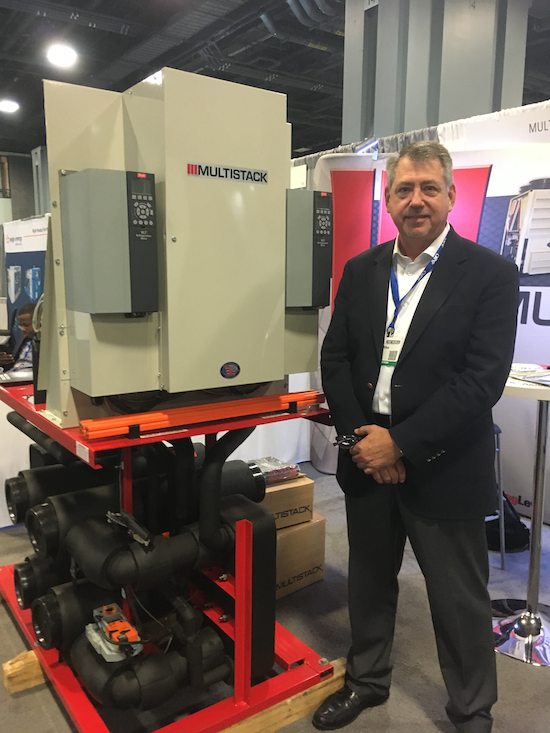