Variable speed drives (VSDs) can cut a chiller’s annual energy use by up to 30 percent while maintaining operating reliability over a wide range of condition. This is accomplished in two ways:

Holding the Line on Operating Costs

Manufacturers are under continual pressure to control costs without affecting operations or worker comfort and safety. Because energy ranks as one of the largest operating expenses, improving energy efficiency of mechanical cooling systems is one of the best ways to reduce operating costs. In a typical water-cooled chiller plant, the chiller itself accounts for most of the energy consumption. That’s why improving chiller efficiency is critical to controlling operating costs.

Even so, chillers rarely operate at their full-load efficiency rating, because conditions vary. Accordingly, the U.S. Environmental Protection Agency (EPA) recommends installing VSDs on centrifugal chillers, because “this will allow the chiller to run at lower speeds under part-load conditions, thereby yielding a higher efficiency than is typically achieved by ordinary centrifugal chillers that control part-load operation with inlet vanes.”

Using chillers with VSDs is a proven way to optimize energy utilization at full and part load, as well as under design and off-design conditions at varying ambient temperatures. In such cases, VSDs, also known as variable frequency drives (VFDs) or DC Inverters, can cut a chiller’s annual energy costs by 30 percent or more.

Because more energy is saved if a chiller can operate with reduced tower water temperatures compared to reduced capacity only, it's worth examining both scenarios closely. 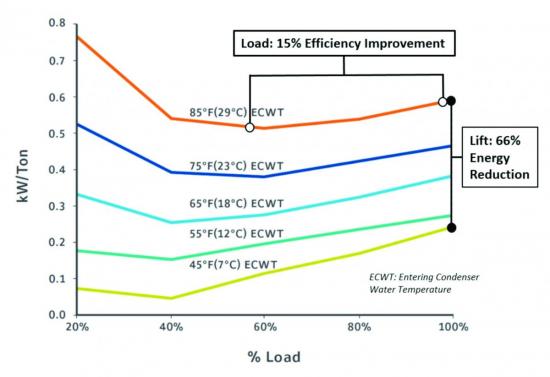 Of course, the cooling load (capacity) is a factor affecting chiller energy consumption. As shown in Figure 1, when a chiller at a constant entering condenser water temperature (ECWT) can reduce load (Btu/hr) by 50 percent, its efficiency (kW/ton) at the new condition improves by 15 percent.

The load reduction is possible, because the number of days when full capacity is required are few. According to the EPA, “Chillers spend most of their operating time at 40 to 70 percent load under conditions that are often considerably different from standard conditions.”

As the name indicates, VSDs can vary compressor motor speed to match capacity. Consequently, whenever a VSD can be slowed to match lower capacity requirements (and this may not always occur depending on the chiller operating profile), energy consumption can also be lowered.

This sharply contrasts with constant speed chillers, which typically accommodate less-than-full loads by closing their pre-rotation or inlet vanes to regulate the flow of refrigerant—which is like maintaining the speed of your car by pressing the gas pedal to the floor and controlling the speed with your other foot on the brake.

But the main factor that affects VSD chiller energy consumption is “lift.” Lift is defined as the difference between the evaporator pressure and condenser pressure.

The thermodynamics of lift has a profound impact on a chiller’s energy consumption (Figure 1). Chiller load is the amount of cooling the chiller provides, while lift determines how hard the chiller must work to deliver the cooling. The greater the difference between evaporator and condenser pressures, the greater the lift and the more work the compressor must perform. By reducing the lift, more energy savings can be realized.

Lower lift is an opportunity for significant energy savings. But these savings can only be achieved by chillers capable of taking advantage of low-lift conditions, such as using 55°F (12°C) or 45°F (7°C) tower water temperatures with full condenser water flow, which are 20°F (-7°C) or 30°F (-1°C) colder, respectively, than the 75°F (23°C) tower water typically allowed by traditional chillers.

Reducing Load and Lift Yields a Strong Return on Investment

When a VSD chiller can leverage the efficiencies obtainable when operating with reduced load and lift, the energy savings quickly recoup the additional investment in VSD technology.

In many installations, a VSD chiller that can take advantage of these off-design conditions can achieve a payback in less than a year or two—plus, the operating savings will continue for decades after the VSD has paid for itself.

Energy isn’t the only source of savings from chillers with VSDs. Variable speed drives also drastically reduce the electrical inrush when chiller motors start up. Without a VSD, a typical chiller motor can experience an inrush of as much as 650 percent of full-load amps, causing tremendous heat buildup and flexing in motor windings. 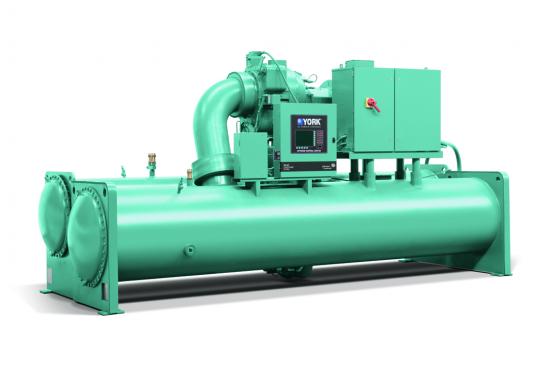 Over time, heat damages the winding insulation and causes motor failure. That means higher repair and/or replacement bills and expensive downtime. With a VSD, a chiller starts more slowly and never draws more than 100 percent of full-load amps—and often far less. Less amperage means the backup generator can be smaller than would be needed for a constant speed chiller, cutting first cost. It also means less heat and less wear and tear on the motor, which reduces electrical shorts and motor burnouts to minimize maintenance costs and potential downtime.

What’s more, if a VSD chiller loses power while it is operating, it can be restarted in just a few minutes. By contrast, a constant speed chiller can require 30 minutes to cool down and be restarted.

VSDs also boost a chiller’s power factor—the measure of how effectively a system uses electricity. Chillers with VSDs often can sustain power factors of 0.95 or more, compared to power factors as low as .6 with constant speed chillers. A VSD can help avoid added charges imposed by some utilities when a facility’s power factor falls below their threshold.

A high power factor also can eliminate the need for a power-factor-correction capacitor. Among other functions, capacitors correct for low power factors. Eliminating capacitors reduces cost and saves space in the mechanical plant.

It’s also worth noting that the slower speed of VSD chiller motors means less noise. This reduces and can possibly eliminate the cost of sound-attenuating equipment, as well as enhances worker comfort.

The capabilities of YORK chillers with VSDs often make them suited for challenging applications that other chillers can’t handle. When it was time for Sierra Nevada Brewing Co. to replace aging, maintenance-intensive chillers in its brewing process, energy efficiency was high on its priority list. The brewer wanted chillers that would run efficiently at part load. But it also needed chillers that could produce very low chilled water temperatures.

To meet both needs, Sierra Nevada installed four 235-ton York YMC2 magnetic centrifugal chillers with VSDs. “One of the advantages with the York YMC2 chillers is that they can maintain high efficiency at partial loads,” says Brandon Smith, project engineer with Sierra Nevada.

“Other systems could not use such low temperatures at partial loads, while still maintaining efficiencies,” says Smith.

Today, all chillers are more efficient than in years past. It is not uncommon to find older fixed-speed centrifugal chillers consuming about 0.60 kW per ton of cooling. VSD chillers can deliver substantially superior efficiency.

Constant speed chillers are designed for efficiency at design full load and design entering-condenser-water temperature. In the real world, chillers rarely operate under those conditions. Under low-load and low-lift conditions, YORK VSD magnetic-bearing chillers can operate at 0.10 kW per ton and lower.

Furthermore, advanced VSD chillers are designed to produce the low-harmonics recommended for today's electrical grid. Solid-state electronic devices, like VSDs, generate frequencies that affect the power system. YORK has been at the forefront of limiting harmonics to comply with utility grid, microgrid and manufacturing-plant requirements.

From reducing your plants carbon footprint, to delivering a cleaner, healthier working environment and cutting energy costs, YORK VSD chillers are designed to meet the most pressing concerns of manufacturers—energy, sustainability, sound, and uptime.