Chrysler’s Technology Center (CTC), located in Auburn Hills, MI, is home to some fourteen thousand employees responsible for keeping the automotive giant in motion. Completed in 1991, the complex is essentially a small city, encompassing 5.3 million square feet situated on over 500 acres. In addition to corporate offices, the facility houses a full laboratory level of various wind tunnels with thermal testing capabilities, a 1.8-mile evaluation road, a noise/vibration facility, an electromagnetic compatibility center, an environmental test center (able to create rain, snow and extreme temperatures), and a pilot production plant.

Within CTC’s walls lies one of the largest central utility plants housed under one roof. The chilled water plant is powered by fourteen 1260-ton chillers and eight 1200-ton plate/frame heat exchangers installed to take maximum advantage of the Michigan climate. Two groups of cooling towers, broken up into north and south banks, and two 3-million-gallon storage tanks are on hand to meet the year-round cooling required by the facility’s critical R&D functions and 24/7 operations. This equipment produces forty-five million ton-hours of cooling annually, with fifteen million ton-hours of free cooling and thirty million ton-hours of mechanical cooling. 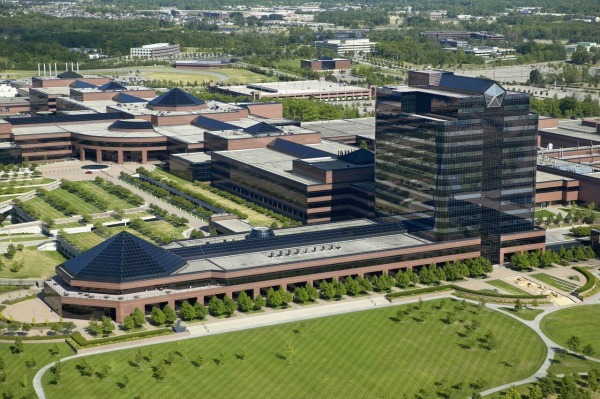 CTC’s chiller plant is piped in a primary/secondary configuration wherein the storage tanks function as the hydraulic decoupler between the generation (primary) loop and the distribution (secondary) piping loop. Going on twenty-four years old, the aging control system was manually overridden and an inarguable candidate for upgrades.

Bryan Whitfield, a Senior Energy Specialist in Chrysler’s Manufacturing Engineering Group, is continually tasked with identifying efficiency projects throughout the automaker’s manufacturing property portfolio. Chrysler’s energy improvement projects, past and present, tend to focus on the paint and assembly plants that consume an incredible 70 percent of the energy used in the entire vehicle production process — everything from assembly and stamping to power-train manufacturing operations. Having previously been CTC’s central plant and building automation manager for eight years, Whitfield knew its systems and their limitations and realized it was ready for optimization.

A preliminary energy assessment performed by tekWorx revealed several operational inefficiencies at CTC, the most glaring of which was inconsistent operation from manual control. Constant speed pumps with balance valves burned extra horsepower, more chillers were running than necessary to meet the building load, and the constant speed secondary distribution pumps were running outside their efficiency curve. Data logs also showed low chilled water ∆T, due primarily to the underutilized storage tanks. Early findings calculated that these identified inefficiencies added up to 25 to 30 percent of the cooling energy costs, and that a project correcting them would yield a payback of less than two years.

Given that this estimated payback fit within Chrysler’s guidelines and knowing that a utility rebate was possible, Whitfield requested funding. Chrysler management agreed, at which point Bryan Whitfield and Stuart Fisher, CTC Site Energy Engineer, put together a performance-based request for proposal (RFP) with the following requirements:

Four suppliers bid the project and tekWorx was selected.

The mechanical portion of the tekWorx solution was based on converting CTC’s system to full variable flow to reduce pumping power and improve system ∆T. This pragmatic approach meant that variable frequency drives (VFDs) were only added to equipment where the combined cost and efficiency gains fit the payback requirement and where a reasonable service life remained. As a result, only ten of the fifteen primary pumps, eight of ten secondary pumps, and nine of the condenser water pumps that fed the North Cooling Tower Bank were outfitted with VFDs. VFDs were not installed on the remaining six condenser water pumps feeding the South Cooling Tower bank, as they were running at the optimal point of their efficiency curve. Similarly, VFDs were not recommended on the two-speed cooling towers, as the cost/benefit ratio would not fit the overall guideline. Finally, the age of the existing chillers, coupled with the cost of their corresponding 4160V VFDs, meant outfitting the chillers with drives was highly impractical.

The control solution from tekWorx was based on a PLC platform and sophisticated adaptive control techniques that would provide real-time optimization of pump sequencing, chiller sequencing, water temperature reset, and storage tank utilization. The PLC system would be integrated into the existing site-wide Building Automation System (BAS) to facilitate remote access. Chrysler already had sufficient instrumentation in place. Other than some calibration, the only other suggested modifications were the addition of new BTU meters and Differential Pressure (DP) sensors for accurately verifying the savings. 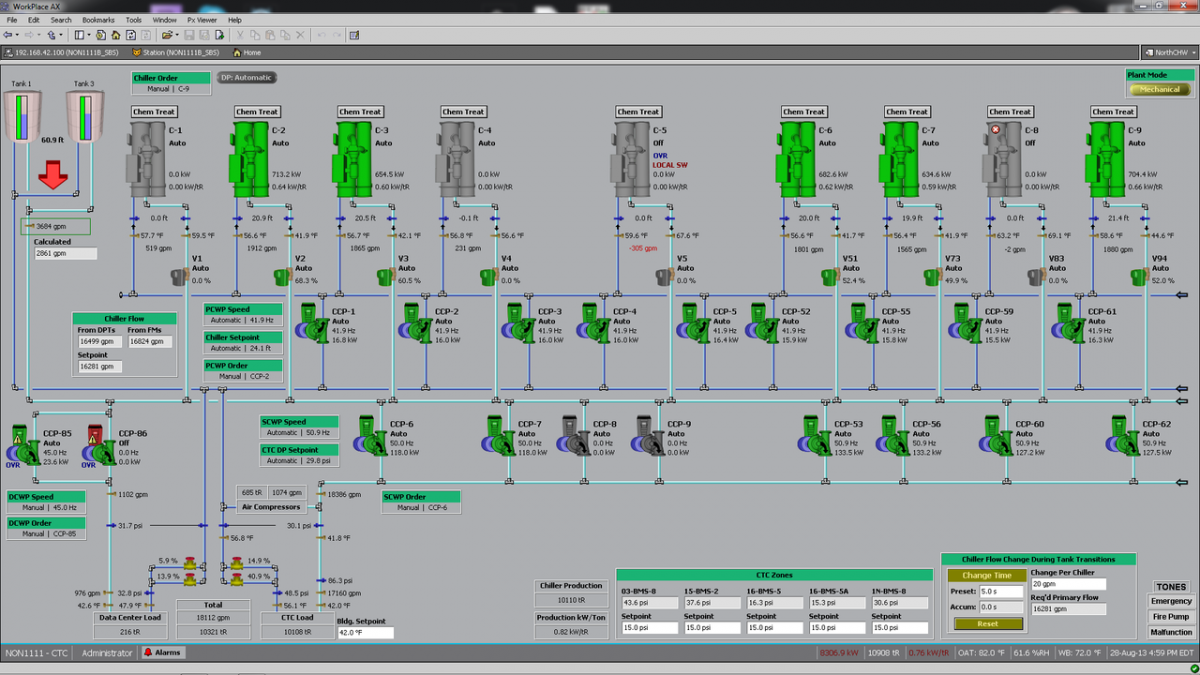 The tekWorx CEO® User Interface has provided the Chrysler Energy Team with a window into their entire cooling system. Operators are able to use an industrial Human Machine Interface (HMI) to oversee both plant operation and optimization.

With Chrysler’s approval of the tekWorx plan, Fisher worked with CTC Central Energy Plant Manager Darin Sharkey to devise an implementation strategy that would keep the plant running during the changeover. The system equipment would be divided into three phases, and each phase would be commissioned individually.

In February of 2013, Phase 1 began as the first set of equipment was modified and tested, while equipment in Groups 2 and 3 were operated manually. With Phase 1 complete and equipment in automatic operation, Phase 2 equipment modification and testing began, while Group 3 continued as a manually controlled backup. With Phase 1 and 2 complete, sufficient equipment was available in full-automatic mode to allow the third and final group of equipment to be converted. All three phases were complete in September of 2013 with a total project completion time of only seven months. Free cooling was tested in November when weather was appropriate, and the plant is now fully commissioned.

As a result of tekWorx CEO® implementation, all CTC’s requirements and energy goals were met: 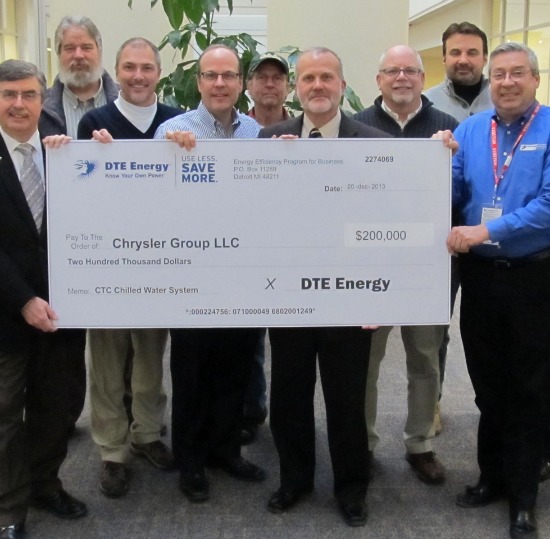 An added bonus of this project was the DTE Energy Reduction rebate check. At $200,000, it was the maximum incentive any single project could qualify for under the utility’s “Energy Efficient Program for Business.”

CTC’s system now experiences much less wear and tear, and the plant is significantly quieter with less equipment in operation. The CEO® User Interface has provided the Chrysler Energy Team with better insight into their system, as the team is now able to look at equipment more closely for diagnostics and troubleshooting. In addition to the efficiencies gained in the conversion from a manual system to an automatic system, those operators are now freed up for other important tasks.

Mike Flaherty is General Manager of tekWorx, LLC, a Cincinnati-based firm that specializes in central energy plant optimization. Prior to founding tekWorx in 2001, he was previously general manager of Parker-Hannifin's international automation business. His product experience includes control software technology for production process equipment. Mike holds a BS in Mechanical Engineering from The Ohio State University.