A Closer Look at the State of Refrigerants

By Chris M Forth, Johnson Controls

Recent legislation is impacting the use of hydrofluorocarbon (HFC) refrigerants, both globally and nationally. On the heels of these changes is confusion about legislation and the availability of certain types of refrigerants. On a global scale, the Kigali Amendment to the Montreal Protocol provides a global phase-down schedule for the use of HFC refrigerants in multiple sectors - including R-134a and R-410A - for the HVAC/R industry. While ratified across the globe by approximately 100 countries to date, the amendment has yet to be ratified in the United States.

In 2016, the United States Environmental Protection Agency (EPA) put forward rules that banned the sale and installation of many types of commercial refrigeration systems using high global warming refrigerants. However, after litigation, the EPA was told it lacked the authority to tell manufacturers that had already moved to HFCs that they now had to move away from HFCs. However, most refrigeration equipment manufacturers had already moved forward with engineering low global warming options.

Most regional efforts to reduce the use of refrigerants with higher-GWP (Global Warming Potential) ratings call for a gradual reduction of HFCs rather than a complete phase-out or ban. The U.S. Climate Alliance currently has 24 member states and aims to reduce greenhouse gas emissions by at least at least 26-28 percent below 2005 levels by 2025 in accordance with the Paris Agreement.

States such as California, Washington, New York, and Colorado, as well as  several others, are proceeding with their own individual HFC phase-down programs in the absence of the federal SNAP Rules with the majority aligning with the SNAP 20 and 21 sectors. Refrigerants such as R-134a and R-410A continue to be the most widely used refrigerants in the HVAC industry globally, federally, and regionally, but are a key focus of state regulations due to their higher GWP values.

Legislation is a factor in refrigerant transitions, but it is not the main factor. Building owners typically transition to new refrigerants when existing equipment becomes too expensive to operate or when the incumbent refrigerant becomes unavailable. A properly maintained chiller can run well past the expected equipment lifetime, regardless of the type of refrigerant used.

HVAC equipment should be replaced when an analysis of new equipment costs versus operating costs provides a good payback scenario or when the refrigerant used in the system is not readily available or becomes too expensive to replace.

After a refrigerant is completely banned by legislation, a limited supply often continues to be produced for servicing. The Montreal Protocol allowed a 10-year service tail for hydrochlorofluorocarbon (HCFC) refrigerants R-22 and R-123 after they were banned from production in new equipment sales. When the service tail production ends the only remaining refrigerant sources are reclaimed and recycled refrigerant from existing equipment. It is critical that all recycled refrigerant is reprocessed back to its original specifications by a reputable reclaimer before being used in a different system.

The Kigali Amendment proposes a partial phase-down schedule for HFC refrigerants, not a total ban. There is no legislation in any region that completely bans the use or production of R-134a or R-410A. In addition, R-134a and R-410A refrigerants currently do not have to be converted to lower-GWP alternatives and chillers utilizing R-134a and R-410A do not have to be replaced with lower-GWP alternatives. To date, servicing of existing equipment is also not affected by global or federal legislation but could be considered in future regulations if reduction commitments are not being achieved.

Almost all greenhouse gas emissions attributed to HVAC systems are from the carbon dioxide (CO2) released into the environment during the production of electrical power that is used to run the chiller. It is imperative to focus on the operating efficiency of a HVAC system and the guarantee that it consumes the lowest amount of energy possible, rather than focusing solely on the refrigerant properties. 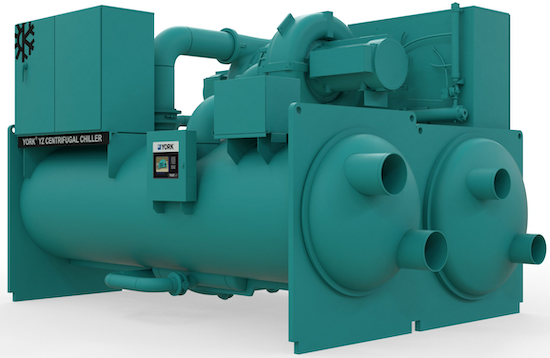 Of the utmost importance with a chiller or complete HVAC system is operating efficiency and its ability to consume the lowest amount of energy possible.

Emissions however do vary by sector and product. Direct-emitting applications such as aerosols and foams release refrigerant gas with every use. Automobiles tend to have higher refrigerant leakage rates due to the bumpy and constant motion of a vehicle. Stationary chillers are engineered to have very low or zero refrigerant leakage rates, and with proper maintenance and end-of-life recovery processes, chillers will have almost no direct refrigerant impact to the environment.

Refrigerant gas can only directly impact the environment if it is released into the earth’s atmosphere. Non-emitting systems - such as chillers - should not be limited to low-GWP refrigerant alternatives that cause the system operation to be less efficient. Chiller operating efficiency greatly outweighs refrigerant GWP effects on the environment and small improvements in equipment efficiency can negate potential direct refrigerant emissions. The ultimate goal is to select refrigerants that allow for the highest overall system efficiency with a lower GWP. 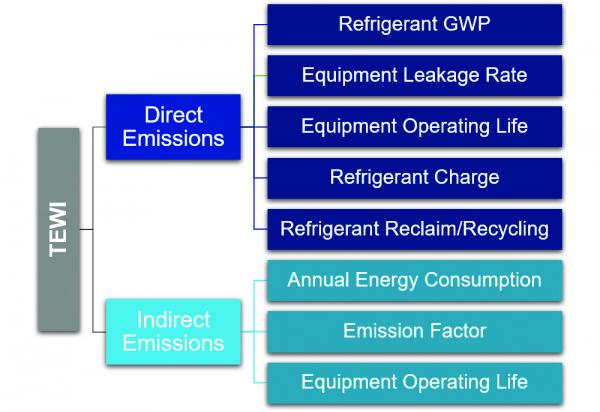 Total Equivalent Warming Impact (TEWI) is calculated by combining the direct and indirect greenhouse gas emissions from operating a chiller.

Considerations when Selecting a Refrigerant

There are several important factors to consider when selecting a new hydrofluoroolefin (HFO), low-GWP refrigerant. Some of the recently introduced HFC alternatives were released only in limited quantities or - in some markets - not at all. The challenge is understandable since it takes time for production to ramp up and for supply chains to be established. However, this lack of availability creates risk for technicians and building owners.

Efficiency and reliability are also extremely important. Improved operating efficiency reduces the energy used, which lowers indirect emissions that can be responsible for 95% or more of total global warming emissions of a chiller. A secondary advantage is the reduction of the quantity of refrigerant. One of the most critical aspects of refrigerant selection is safety. The flammability and toxicity of a refrigerant must also be considered. For example, a new refrigerant might appear to be acceptable based on GWP and availability, but its toxicity classification may make it unacceptable for specific applications. 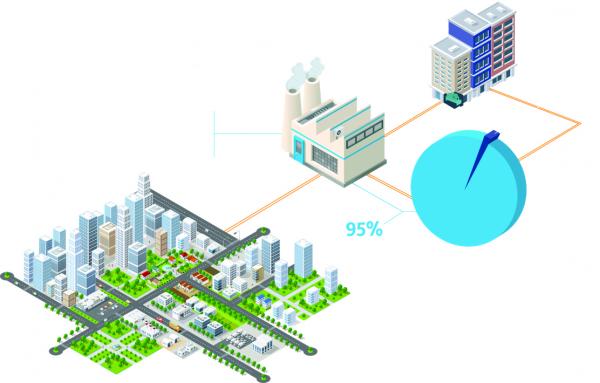 Indirect emissions due to energy consumption account for almost all greenhouse gas emissions from a chiller.

The Long View of New Refrigerants

Energy consumption of HVAC/R systems has the greatest impact on operational cost - it is typically more expensive than the installation and first cost of system equipment. Purchasing energy-efficient equipment with potentially higher first cost can often be offset by continued operational savings over the lifetime of the system. Payback analysis is available to compare a wide range of system efficiencies and equipment types.

Chris M. Forth is Executive Director of Regulatory, Codes and Environmental Affairs, Johnson Controls, and leads the regulatory, codes and environmental affairs for the Johnson Controls Ducted Systems (Unitary) business. Forth has worked in the HVAC industry for 30 years serving in various capacities including design and product engineering as well as product management. For the last several years he has been dedicated to regulatory issues and has been leading efforts on the transition to low GWP refrigerants in individual states as well as at the federal level. He has also worked on other initiatives such as the pending 2023 DOE efficiency transition for unitary products and California’s Ultra Low NOx regulations for gas furnace emissions. Forth can be reached via LinkedIn @ Chris Forth.

At Johnson Controls, we transform the environments where people live, work, learn and play. From optimizing building performance to improving safety and enhancing comfort, we drive the outcomes that matter most. We deliver our promise in industries such as healthcare, education, data centers and manufacturing. With a global team of 105,000 experts in more than 150 countries and over 130 years of innovation, we are the power behind our customers’ mission. Our leading portfolio of building technology and solutions includes some of the most trusted names in the industry, such as Tyco®, YORK®, Metasys®, Ruskin®, Titus®, Frick®, Penn®, Sabroe®, Simplex®, Ansul® and Grinnell®. For more information, visit www.johnsoncontrols.com.

All photos courtesy of Johnson Controls.