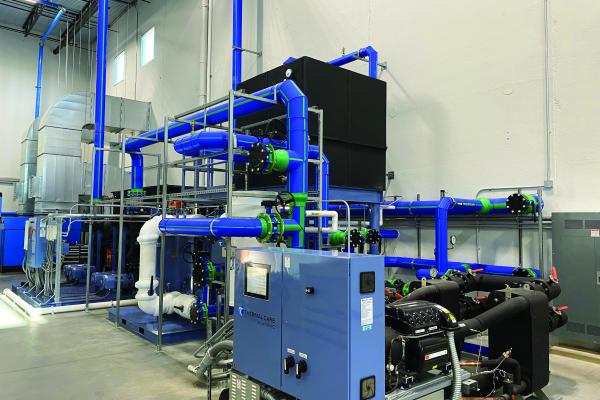 Schoeneck Containers, Inc. (SCI) is a company that thinks a lot about its future – and how to continue to maintain a long track record of profitability and reliability while meeting a growing demand for its quality plastic containers for customers throughout North America. It’s the kind of thinking driving the decision to install a closed-loop adiabatic fluid cooler and central chiller with free-cooling capabilities at the company’s new 250,000-square-foot production facility in Delavan, Wisconsin.

By Rajesh Dixit, Johnson Controls
Absorption chillers have been around for more than 75 years, with several thousand chillers operating successfully all over the world today. Yet myths about cost, operation and performance surround this technology, particularly in North America. Look beyond the myths and you’ll discover absorption cooling technology can be efficient, cost-effective, flexible and reliable.
[ Read Full Story ]

By Joe Leichner, PE CMVP, Director of operations, owner sales, Daikin Applied Americas
While the chiller is the heart of a chilled water system, its support system of components and controls are equally critical to maintain and manage to ensure the highest system efficiency levels are attained. Emphasis is often placed on the chiller since it is the most visible and typically the highest energy element of a chilled water system. Yet, if you look beyond the flanges, there’s an opportunity to improve delivery of chilled water to the airside or process loads and maximize system efficiency.
[ Read Full Story ]

By Al Fosco, Global Marketing Manager, Frigel North America
Plastics processors are looking to advanced process cooling equipment to lower operational costs, and in many cases, improve the quality of products and achieve sustainability goals. But it’s more than just a matter of finding a better mousetrap and putting systems to work. Instead, it requires a keen understanding of the processes involved, followed by the design and installation of advanced technology in combination with the right process cooling systems matched to a company’s goals.
[ Read Full Story ]

By Frigel Corporation
Intelligent process cooling describes an approach to cooling in beverage production and packaging that moves beyond evaporative cooling towers and the use of traditional central chiller systems that rely on ammonia as a refrigerant. Unlike traditional methods, it intelligently matches process cooling systems to individual cooling loads without an evaporative process or the use of ammonia to gain verifiably better results in energy efficiency, water use, and safety.
[ Read Full Story ]